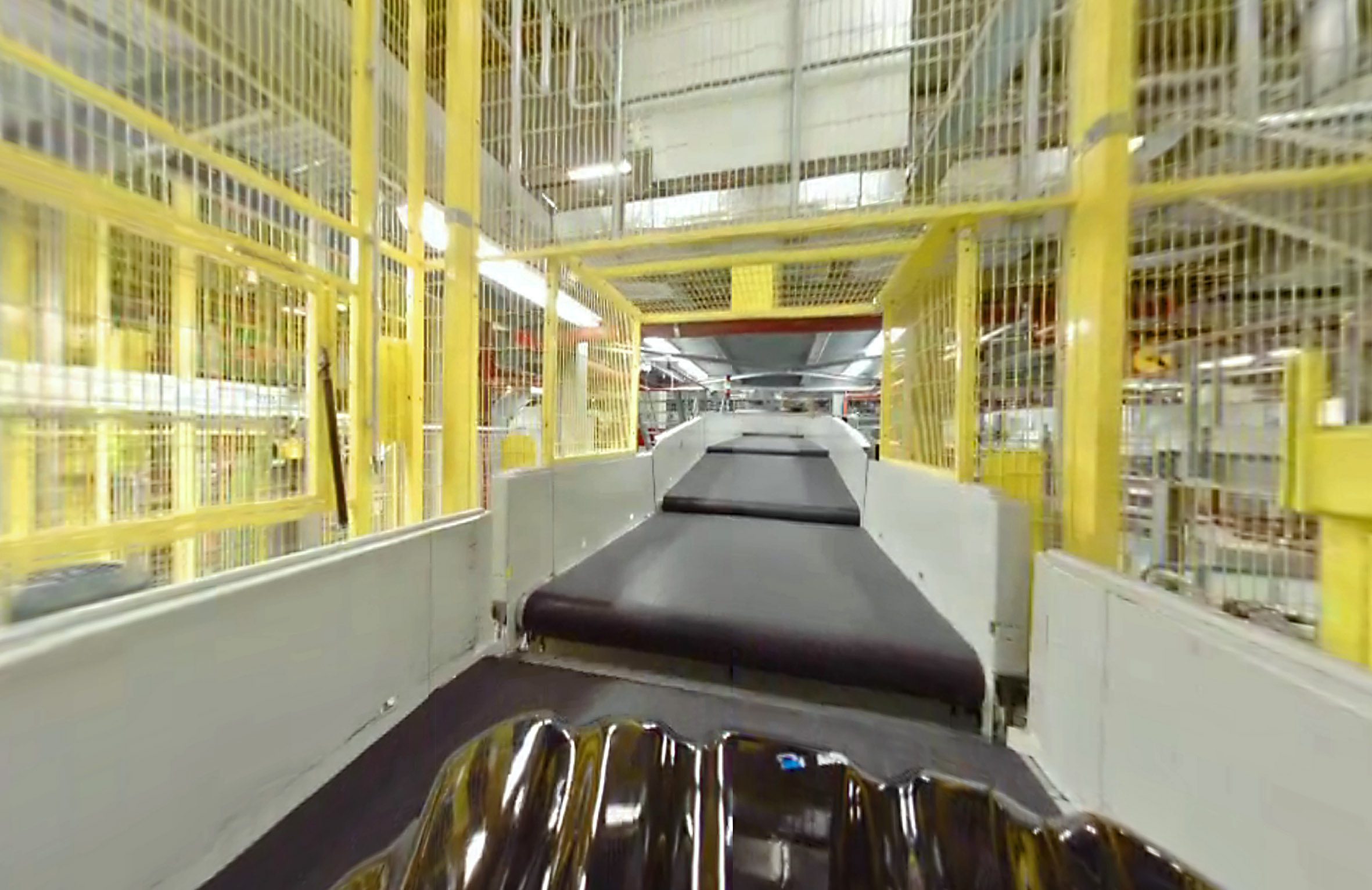 London, Sept. 21, 2015—360 degree video recording system from Arithmetica has been used to reveal the amazing journey of a suitcase at one of the world’s busiest airports. From the moment the case is loaded by hand onto the conveyor belt to when it is picked up by a ‘robotic arm’ to be transported to the departing plane, the three minute 360 degree interactive video shows the complexities faced by Schiphol Airport, which handles more than 50 million pieces of luggage every year.

The original film was commissioned by the Airport authorities following a multi-million dollar refurbishment and upgrade of the luggage handling system. Directed by Dutch based creative services agency Twain, with support from specialist production company TX, the interactive 360 degree video was made using a SphereVision recording and production system.

First debuted at Schiphol Airport in a 360 degree pop up dome cinema to an audience of personnel who had been involved in the refurbishment project, the 360 interactive video was then placed on the airport’s website. Using SphereVision, a limited edition iOS app was also created as well as pre-processed Flash versions of the original.

“We are amazed at how quickly this video has taken off,” commented Joel van den Hoogen, Creative Director at Twain. “The original feedback from the airport and personnel involved in the refurbishment was very positive and then the video went viral. So far we have received interest from around the world, with coverage on CNN, Fox8, Al Jazeera, the Daily Mail and Telegraph as well as hundreds of thousands of hits on YouTube, Facebook and the airport’s own website.”

The 360 degree representation of the suitcase’s journey was

directed by Twain and filmed by TX using a SphereVision recording system in a single night at Schiphol Airport while the normal baggage transfer operations continued. A specially adapted suitcase was fitted with a Ladybug camera and SphereVision recording system before being loaded onto the luggage transfer network, which is made up of 21 kilometres of conveyor belts as well as a 5 kilometre rail system. Handling over 50 million pieces of luggage a year, with a capacity of up to 70 million, at peak times the system can transfer 160,000 items a day. Individual items can travel up to 2.5 kilometres, at speeds of up to 40-50 kilometres per hour, on the 30 minute journey from check in to take off.

“The SphereVision 360 video recording, production and playback system is easy to use from onsite filming to the end user sitting at a computer watching a YouTube video or to an audience of professionals in a pop up cinema,” continued Joel. “We have worked with SphereVision and TX in the past on projects for other clients, including big names like Porsche and NS (Dutch Railways), and we remain impressed with SphereVision’s ability to provide visual access to inaccessible places, giving perspectives and views of a location or environment that would not otherwise be possible.”

SphereVision is Europe’s leading brand for spherical and 360 degree video solutions. 360 video systems are able to record a real-world environment in all directions at the same time, capturing every aspect of the scene in one go. When the video is played back – on a laptop, mobile device or over the Internet – viewers can pan around the image, moving through and exploring the site as if they were there. Footage can be integrated with floor and site plans using the company’s innovative software and the high-resolution 360 imagery can also be integrated with online mapping.  www.spherevision.com

Arithmetica is an innovator in 360-degree imaging solutions and automated laser scanning data processing software. Located at the world famous Shepperton Studios near London, Arithmetica is the company behind SphereVision and Pointfuse. Arithmetica is an inventive software house that develops ground breaking software solutions to solve real world scientific, medical and engineering problems. Arithmetica builds on more than thirty years of television and film production to develop software for clients around the world. Arithmetica solutions handle complex data rich information and are simple and easy to use.

Transmission (TX) Ltd was formed in 1989. With over 20 years’ experience of supplying high end equipment/ facilities, specialised systems and experienced crews to the broadcast industry TX provide everything from High Definition multi-camera systems for dramas, compact remote HD camera and Mini Cam systems, Underwater and Onboard camera units for factual programme making, 360 video and spherical camera systems for online media and IPTV, extreme Mini Cam rigs for hazardous environments and RF & fibre optic links to get your signals where they need to go.

TX work with all digital recording formats and our specialist systems include time-lapse, high speed, IR and thermal technologies. Leaders in their field the expertise, innovative ideas, engineering skills and consultancy of TX are available to give any production the very best service, anywhere in the world. www.ttx.co.uk