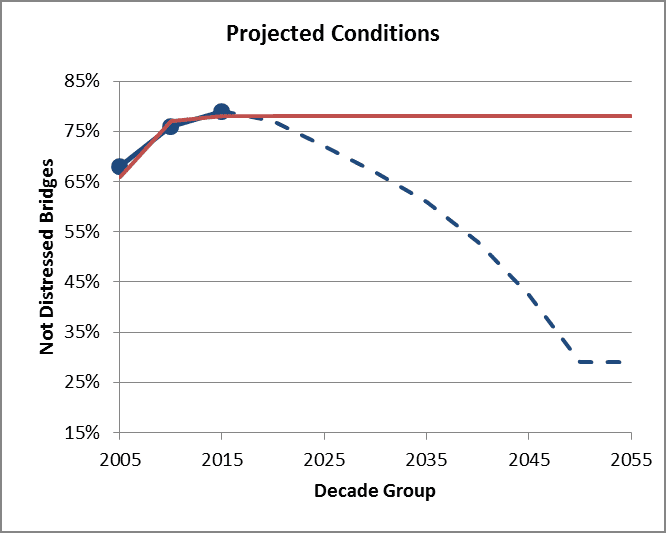 Matt Ball on September 21, 2015 - in Bridges, Corporate, Maintenance
Salem, Ore., Sept. 17, 2015—The latest bridge condition report from the Oregon Department of Transportation puts a dollar figure to the cost to Oregon’s economy if the state’s bridge system isn’t adequately maintained: In the next 20 years, Oregon could forfeit $94 billion in production and 100,000 jobs if action isn’t taken.
The good news: If we act soon, Oregon still has time to keep our bridges healthy.
Oregon’s state highway system contains more than 2,700 bridges. (The state’s cities and counties own about another 4,000.) More than half of the state highway bridges were built in the 1950s and ‘60s; these bridges are 50 to 65 years old.
“If these bridges were people, we’d be throwing retirement parties for them,” said Bruce Johnson, Oregon State Bridge Engineer. “Instead, we’re asking them to carry more traffic at higher speeds and heavier weights.”
“Healthy bridges are critical to Oregon’s economy and our lifestyle,” said Matthew Garrett, ODOT Director. “They connect communities; they link lives. We cannot let those bonds break. We must be willing to make the necessary strategic investments.”
ODOT’s 2015 Bridge Condition Report summarizes bridge conditions statewide. And, because of previous investments beginning a dozen years ago, the system looks pretty good at the moment. Only two in every eight state highway bridges show signs of wear and tear that would call for significant repair or replacement.
But without continued investment to repair or replace the state’s oldest bridges, Oregon’s bridge system will fall into disrepair: Funding levels for the near future are the lowest in the past 20 years, and inflation continues to erode the purchasing power of each dollar.
The report documents some basic, stark facts:
In coming decades, hundreds of state bridges will deteriorate to the point that they will have to be restricted to truck traffic. Detours increase transportation costs for Oregon businesses, making them less competitive in national and world markets and costing Oregonians their jobs.
“Without the funding to proactively address bridge needs to prevent problems before they occur, we are forced to react to problems after they occur,” said ODOT Director Garrett. “Patching holes in decks and making emergency fixes to bridges is not a strategic use of taxpayer money, and is very inconvenient to all travelers. Strategic investment to repair or replace older bridges in a coordinated manner protects our economy; minimizes detours, delays and traveler inconvenience; and keeps Oregon moving well into the future.”