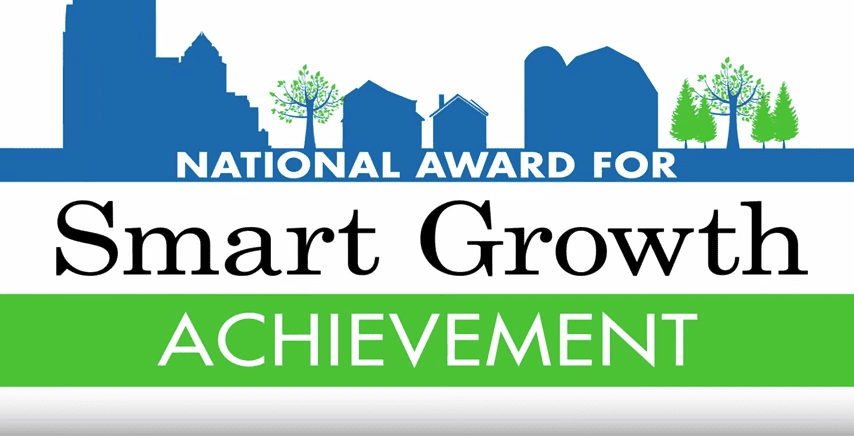 WASHINGTON – The U.S. Environmental Protection Agency (EPA) today recognized projects in three communities as winners of the 2015 National Award for Smart Growth Achievement. Winners include a new public park on a formerly contaminated site along the Passaic River in Newark, N.J. and new mixed-use developments that are spurring investment and revitalization in Jackson, Tenn. and Hamilton, OH.

This award is given annually for creative, sustainable initiatives that better protect the health and environment of our communities while strengthening local economies. The 2015 award is presented to projects in three categories: Plazas, Parks, and Public Places; Corridor or Neighborhood Revitalization; and Built Projects.

“As part of our commitment to help communities grow in ways that protect the environment and support local goals, EPA is pleased to recognize the winners of this year’s National Award for Smart Growth Achievement,” said EPA Administrator Gina McCarthy. “The smart growth strategies behind this year’s award winners are making a visible difference in their communities, and they provide models that can guide and inspire many others.”

Riverfront Park fulfills a decades-long movement to reclaim the Passaic riverfront for the people of Newark, N.J. Situated on the cleaned-up site of a former metal smelting plant, the park provides Newark’s only public access to the river and outdoor recreational space for a neighborhood where the amount of green space dedicated for use as parks is far below the national average. The 19-acre park is the result of a public engagement process that included more than 6,000 people. It is expected to attract new economic development, particularly to downtown Newark, and will eventually be part of a string of riverfront parks and trails that will stretch for five miles.

For years, Jackson, Tenn. has struggled to revitalize a declining downtown. In 2003, powerful tornados ripped away much of the downtown, destroying property and displacing residents and businesses. Jackson used the disaster as an opportunity to bring residents together to create a new vision for the downtown. That vision guided the development of Jackson Walk, a 20-acre mixed-use redevelopment district around a cleaned-up brownfield site that now provides affordable homes, new businesses, and a wellness center with an urgent care clinic. Increased property values have generated new tax revenues, and from 2012 to 2014, more than 30 new businesses opened, bringing jobs.

The “Rust Belt” city of Hamilton, Ohio, has become an emerging hub of innovation and revitalization. With creative vision, strategic planning, and community engagement, three downtown projects have reinvigorated the city’s central business district and set the stage for new economic development. As of May 2015, the projects’ collective $17.2 million investment has spurred an additional $15 million in investment in surrounding buildings, and the downtown occupancy rate has increased by 14 percent. The redevelopment has created a walkable, vibrant community in the historic neighborhood, with public transit connecting the area to the rest of the county.

Award winners were chosen based on their effectiveness in creating sustainable communities; fostering equitable development among public, private, and nonprofit stakeholders; and serving as national models for environmentally and economically sustainable development.

EPA created the National Award for Smart Growth Achievement in 2002 to highlight exceptional approaches to development that protect the environment and public health, encourage economic vitality, and enhance quality of life. To date, more than 900 communities have applied for the award. Sixty-two communities from 26 states have been selected for smart growth approaches that other states, tribes, cities, suburbs, and rural communities can use to create economically strong, environmentally responsible development. EPA’s Office of Sustainable Communities manages the awards program.

EPA will host a ceremony on September 17 to recognize the winners.