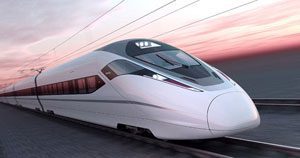 BEIJING and LAS VEGAS, Sept. 17, 2015—China Railway International USA CO., LTD. and XpressWest have agreed to form a joint venture that will accelerate launch of the XpressWest rail project connecting Las Vegas, Nevada to Los Angeles, California (the “Southwest Rail Network”). The Project will develop, finance, build and operate the Southwest Rail Network, with stations in Las Vegas, Nevada,Victorville, California, and Palmdale, California, and service throughout Los Angeles.  The decision to form a joint venture is the culmination of years of work and builds upon the significant accomplishments of XpressWest.

Supported by $100 million in initial capital, this new high-speed rail line (approximately 370 km(s) in length) will create new technology, manufacturing, and construction jobs throughout the interstate corridor and will connect Southern Nevada and Southern California to drive new economic development and grow tourism – a vital part of the region’s economy. The Project will serve as a model of international cooperation and will firmly establish a United States-based high-speed rail industry that will result in significant job creation throughout the Southwest with construction planned to commence as early as September 2016.  The Project will immediately undertake all necessary regulatory and commercial activities to advance the reality of regional high-speed rail in the United States.   Implementation will begin within the next 100 days.

XpressWest is a private interstate high-speed passenger railroad company led by the Marnell Companies and dedicated since 2007 to developing a high-speed passenger rail line connecting Las Vegas to Los Angeles.  Authorized by the United States federal government to build and operate the Southwest Rail Network, XpressWest has completed its required federal permitting work, obtained approvals from the Surface Transportation Board, and completed significant development work for the route, including completing the federal environmental review process.  Investment-grade ridership studies, a prerequisite for obtaining project financing, demonstrate the Southern Nevada-Southern California corridor is a robust market for future rail passengers.