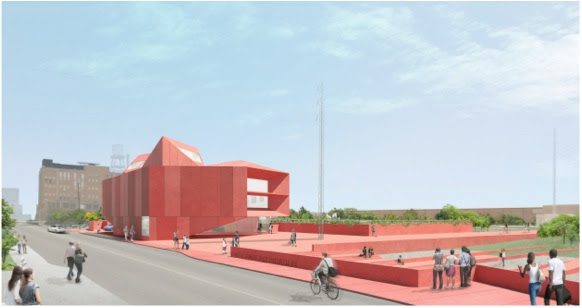 SAN ANTONIO, Texas, Sept. 17, 2015—The Linda Pace Foundation announces the details of its new Adjaye Associates-designed building, which will open to the public in 2018 in San Antonio, Texas. The building is the vision and mandate of the Foundation’s Founder, Linda Pace (1945-2007), who was driven by the belief that art is a vital social force. World-renowned architect David Adjaye has designed a building to exhibit the Foundation’s growing collection of over 800 paintings, sculptures, installations, and video works by international contemporary artists. The building will serve as a destination for visitors to contemplate and experience adventurous artwork from the recent past. Admission will be free.

The design presents a two-story structure with an exterior clad in crimson-hued panels of precast concrete with glass aggregate. The planes are punctuated by strategically placed, oversized windows directed toward park and city views. Largely rectangular, the building features a dramatic rooftop of sloping angles and skylights that rise to varying heights and echo cut-away spaces at the building’s base. Inside the lobby of the building, a grand staircase leads up to a series of three gallery spaces with concrete floors and white walls and ceilings. Totaling 14,000 square feet, it will include 10,000 square feet of exhibition space, with the remaining spaces devoted to administrative offices, and MEP.

The new building will be called Ruby City, based on a dream that Linda Pace had, which she sketched and shared with Adjaye during a visit he made to San Antonio in 2007. Ruby City will be situated on Camp Street, and will be part of the Linda Pace Foundation campus extending from South Flores Street to the San Pedro Creek. The campus also includes CHRISpark, built in 2005, a one-acre public green space named in honor of Pace’s son, who died in 1997; and SPACE, the Linda Pace Foundation Gallery, which opened to the public in 2014 and presents special exhibitions. Visitors will enter Ruby City from the west, facing San Pedro Creek, and enjoy views of CHRISpark, a new outdoor sculpture garden on the south side of the property, and terraced banks leading to San Pedro Creek.

Ruby City is slated for a 2016 groundbreaking, and a public opening in 2018, timed to coincide with a year of celebrations commemorating San Antonio’s 300th birthday. The City of San Antonio has plans to develop San Pedro Creek, adding foot and bike paths extending to the downtown area, and transforming the creek-side into a public park.

The Linda Pace Foundation’s President, Rick Moore, says, “The building is envisioned as a beacon for San Antonio. The impact of the Foundation’s mission is already evidenced in San Antonio’s thriving contemporary art scene and its creative economy, fueled, in part, by the rigor and success of Artpace’s international artist residency program, which—as a separate organization—receives grants from the Linda Pace Foundation. This is a testament to the living legacy of the Founder’s vision and the keen leadership of the Board and Staff of the Foundation.”

Kathryn Kanjo, a member of the Linda Pace Foundation’s Board of Trustees and Deputy Director, Arts & Programs at the Museum of Contemporary Art San Diego, adds, “Linda Pace was committed to San Antonio’s cultural vitality. She envisioned David Adjaye’s building as an exceptional architectural experience that would be as affecting and inspiring as the art it would contain.”

Explains Adjaye, “When I visited San Antonio in 2007, and met with Linda, we sketched out ideas and together, we envisioned a building that would resonate with her dream of the Ruby City. Like a city, the design offers an organic, heuristic encounter with the Foundation’s works and my hope is that it will become a place where artists and the wider community can be inspired to realize their own dreams through a meaningful experience with contemporary art.”

Linda Pace was an artist, collector, and philanthropist who died of cancer in 2007. Early in the year 2000, as Pace continued to expand her contemporary art collection, she began to seriously contemplate establishing an exhibition space to present the collection to the public. On April 28, 2003, she founded the Linda Pace Foundation with that goal in mind. Over the next several years, Pace researched architects and exhibition spaces.

When she met David Adjaye in 2006, she realized he was the ideal architect for the project. Dreams were important to Linda Pace, and she had a practice of recording them in sketches. Her vision of Ruby City, a jewel-like structure sited on San Antonio’s San Pedro Creek, likewise inspired Adjaye. Together, Pace and Adjaye explored the Foundation’s property and the San Antonio Missions, a National Historic Park, while considering the new building’s design. The architecture they saw at the Missions informed Adjaye’s design for the vaulting, skylit gallery spaces of the new building. Since Pace’s death, the Foundation’s Board of Trustees has been strategically preparing and laying the groundwork to make this new structure a reality.

In addition to Adjaye Associates as the design architects, a local team has been secured to work on the building project, including: Alamo Architects, Executive Architect; Norton Company, Project Management; and Whiting-Turner, General Contractor. The budget is $16 million, which will be privately funded by the Linda Pace Foundation.

About the Linda Pace Foundation

Since 2007, the Foundation has loaned more than 200 works to the Contemporary Arts Museum Houston, Bass Museum of Art in Miami Beach, the Tate Museum in London, MASS MoCA in North Adams, Mass., the Brooklyn Museum in New York, the Louisiana Museum of Modern Art in Denmark, and the Museo de Arte Contemporáneo de Monterrey – MARCO in Mexico and others.

The Foundation fulfills Linda Pace’s vision of supporting the work of international contemporary artists, including those who have had residencies at Artpace. Acquisitions typically echo the themes and character of Pace’s own collecting, which favored works that reflected a feminist perspective, engaged social issues, and considered aspects of spiritually and beauty.

Since Linda Pace’s death in 2007, the Foundation has steadfastly worked towards realizing her vision, in fact her mandate – to create an artful campus for the community, artists, and the world to experience contemporary art. David Adjaye is to design a building to exhibit the Foundation’s growing collection and serve as a destination for contemplation and experience of adventurous artwork from the recent past.

Linda Pace (1945-2007), an artist, collector and philanthropist, was driven by the belief that art is a vital social force. As an artist, she exposed the symbolic potency of everyday images and objects in her drawings and assemblages. As a collector she gathered hundreds of contemporary artworks into a personal and expressive collection, which reflects many of the critical strands of recent art. And as a philanthropist, she boldly fostered the work of today’s most adventurous artists through the founding of Artpace San Antonio. In addition to her work in Texas, Pace served on the national committee of the Whitney Museum of American Art, the national council of the Aspen Art Museum, a member of the Anderson Ranch Arts Center in Aspen, a member of the arts advisory committee at The Aspen Institute, a member of the board of trustee at the Dia Center for the Arts in New York, a member of the international council of the Tate Gallery, and won numerous awards for her commitment to artistic distinction Linda Pace died on July 2, 2007. Today, her generous legacy continues through the efforts of the Linda Pace Foundation, which manages her collection, and promotes the production and display of contemporary art in Texas and beyond.

David Adjaye OBE was born in Tanzania to Ghanaian parents and his influences range from contemporary art, music and science to African art forms and the civic life of cities. He founded Adjaye Associates in 2000 and immediately won several prestigious commissions and the practice now has offices in London, New York and Accra and is working throughout the world. Current projects include the $360 million Smithsonian National Museum of African American History and Culture on the National Mall in Washington DC. Adjaye is renowned for his frequent collaborations with innovative contemporary artists and curators. Rather than drawing a distinction between the world of art and architecture, his approach to design seeks to cross creative platforms and to establish a cultural intersection. Examples include Chris Ofili’s “The Upper Room”, exhibited 1999-2002 and again in 2010—thirteen paintings displayed in an environment designed by Adjaye that is now in the permanent collection of Tate Britain.

His practice also has significant experience of working with major galleries, museums and arts institutions. In London, Adjaye Associates recently designed the Marian Goodman Gallery space (2014), while in the US, the firm delivered a museum for contemporary art in Denver (2007) and the Ethelbert Cooper Gallery of African & African American Art at Harvard’s Hutchins Center (2014)—for which Adjaye co-curated the inaugural exhibition. In addition to the significant commission for the Smithsonian Institution in Washington DC, current architectural work in the US includes the new Studio Museum in Harlem, and an arts center for Colgate University. Adjaye’s work will be featured as part of a comprehensive mid-career survey at the Art Institute Chicago from September 2015 through January 2016.