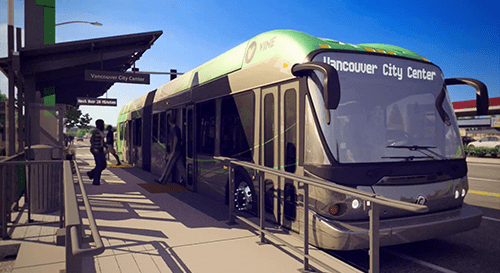 “Bus rapid transit is a proven and effective way to relieve congestion, improve service, and stimulate economic growth, especially in fast-growing communities like Clark County,” said U.S. Transportation Secretary Anthony Foxx. “Through common-sense solutions like the Rapid Growth Area Transit Program, included in our GROW AMERICA proposal, reliable, long-term funding would be provided for BRT and other essential transportation projects around the country.”

The Vine system will use ten new, 60-foot buses, which will nearly double the passenger capacity of current bus routes. In addition, the buses will be served by new stations designed to make boarding quicker and easier, especially for the elderly and those with disabilities. Along with faster and simpler boarding, other enhancements such as signal priority technology will result in significant time savings on the Vine’s route compared to current bus service.

“We are proud to support the Vine, which will bring efficient, affordable rapid transit to Clark County,” said FTA Acting Administrator McMillan. “This project will encourage growth and development in downtown Vancouver, as well as transform the way people get to major employment and education centers like Clark College and the Veterans’ Administration Hospital.”

With the opening of the Vine, bus ridership in the corridor is expected to increase to 5,800 average weekday trips. The rapid bus will run every 10 minutes during rush hour and every 15 minutes during off-peak times. Downtown Vine stations will also connect to a cross-river shuttle, linking to Portland’s MAX light rail system.

The U.S. Department of Transportation is contributing approximately $42.5 million in federal funding for the project, including $10.7 million in Small Starts funding, $27.8 million in Bus and Bus Facilities funding, and $4,000,000 in Congestion Mitigation and Air Quality (CMAQ) funding. The total cost of the project is $53,120,000, the remainder of which is covered by the State of Washington, C-Tran, and the City of Vancouver.