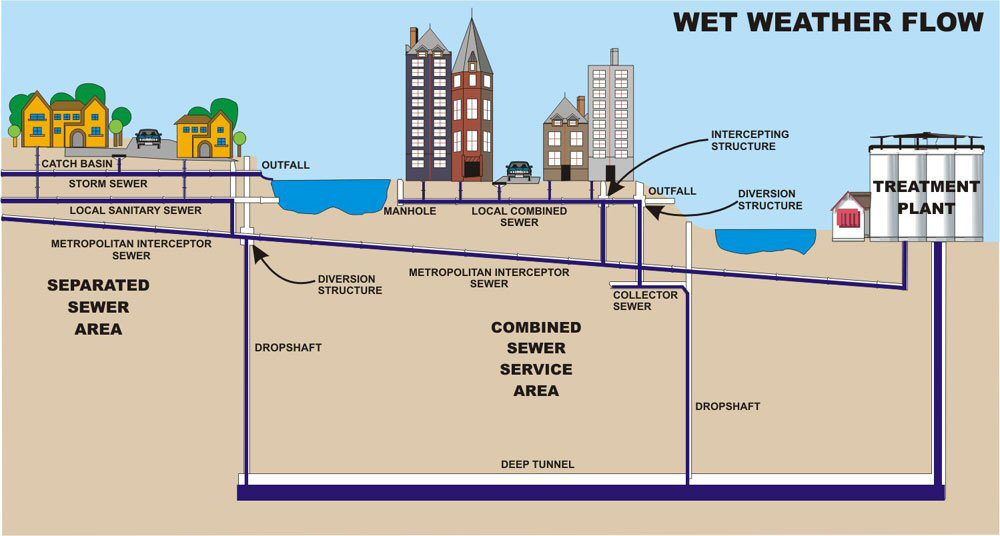 A crucial requirement of the 2004 consent order between the City of Columbus and the State of Ohio is to reduce the environmental impacts caused by Combined Sewer Overflows (CSOs). The Olentangy-Scioto-Interceptor-Sewer) Augmentation Relief Sewer, known as OARS, is the key component in meeting this goal. This sewer tunnel will intercept wet weather overflows that currently empty into the Scioto River and carry the flows instead to the city’s Jackson Pike and Southerly wastewater treatment plants.

The tunnel will provide relief to the existing OSIS trunk sewer from just north of the Arena District to the Jackson Pike facility (see an aerial view of the alignment). The construction of Phase 1 began in September 2010 and involved digging a 20-foot diameter tunnel with a total length of about 23,300 feet. Phase 2 began in August 2011 and involves construction of three shafts, a pump station, pump electrical building, river overflow structure and other infrastructure.  The overall project is currently scheduled to be completed in late summer 2017.

The overall length of the OARS tunnel is just under four and a half miles, and will include three relief structures that will divert wet weather combined sewer flow from the OSIS to the OARS tunnel. The OARS project will control all of the regulators (relief structures where the sewers currently overflow to the river multiple times per year) in the downtown riverfront area to a level in which they might overflow once every ten years on average.

The tunnel is being built approximately 170 feet below ground, reducing risks associated with construction at more shallow levels. This will require special drop structures (or vertical shafts) to direct flow from existing shallow sewers to the new deep tunnel. In addition, the drop structures will dissipate energy and minimize air entry into the tunnel. The tunnel shafts are designed to handle hydraulic surges which will prevent impacts on upstream sewers.

This project is the largest capital improvement project undertaken by the City of Columbus to date. Total construction cost is just under $371,000,000 with an additional 5,661,608 spent on downtown odor reduction facilities. Financing for the project is through low interest loan funds available from the Ohio EPA and the debt is serviced through Columbus sewer customer revenue.