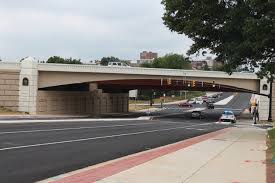 “This Freedmans Village Bridge does two essential things – it replaces aging infrastructure and makes necessary improvements to accommodate traffic for future generations in Northern Virginia,” said Deputy Secretary Mendez.  “We need more projects like this one, all around the country, which can only happen with a long-term transportation bill.”

Earlier this year, the Obama Administration proposed the GROW AMERICA Act, which will provide critical investments to fix our decaying roads and crumbling bridges and ensure the safety of our transportation systems. Sixty-five percent of America’s major roads are rated in less than good condition, while one in four bridges require significant repair or cannot handle today’s traffic.  Additionally, the Act will help increase access to transit for the 45 percent of Americans who do not currently have access to transit. These programs will help communities keep pace with our expanding economy, our growing population, and the traveling needs of the public.

“The project will provide drivers with a safe, efficient commute along with transportation options for bicyclists and pedestrians,” said Federal Highway Administrator Gregory Nadeau.  “I commend Virginia for its forward-thinking approach to transportation.”

The original single-span bridge was built in the 1940s and was a thick, solid structure that suffered from deteriorating concrete, corrosion and chloride contamination. It has also withstood many years of increasing traffic loads.  The bridge was structurally deficient, and truck weight was limited to 26 tons.

With Washington Boulevard carrying more than 80,000 vehicles each day over Columbia Pike, the new bridge is built to wider lanes and improved shoulders to accommodate the future widening of Columbia Pike along with bicyclist and pedestrian access.  It also has many aesthetic improvements reflecting the area’s history.