Eric Chappell, community evangelist for InfraWorks 360 spoke about some of the new features released.

Traffic simulation has been added. While the software did have a preview of this feature, it has graduated now to a fully supported feature set. This feature has its own user interface and is one of the more robust features added to the product.

Traffic simulation allows you to set up demand zones and will analyze the flow of traffic to simulate real traffic behavior. It includes such behavior of as the car sitting in the left turn lane that really wants to turn right. The simulation highlights good traffic flow in blue and congestion areas in red, allowing you to iterate your design, fixing and redesigning to address the problem. Traffic simulations do require cloud credits to perform simulations, with physical area determining the credits used.

Traffic features that have been expanded are intersection turn control, where the design intent impacts the model. If you restrict traffic flow, it automatically modifies the median opening. There are also tools now that allow for offset intersections and roundabout design for either left or right driving patterns. Pavement markings are now added automatically. 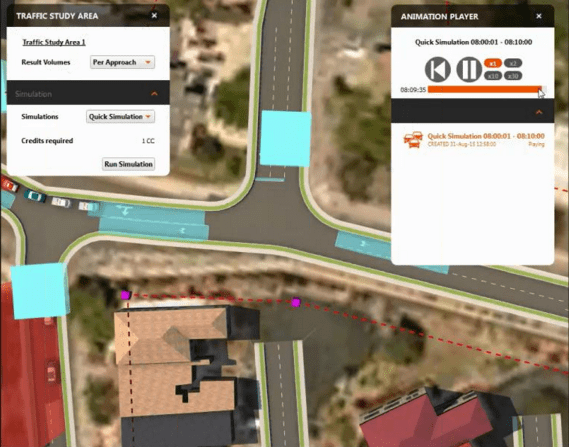 A new extension of presentation capability in InfraWorks 360 is the Points of Interest that are visible when viewing a model in the web browser. You can link to building models, web assets, and other details — drawing the viewers attention to communicate. There are also enhancements to panorama views with color optimization and improved performance for touch devices.

Tim Yarris, principal user experience designer on the product team of Civil 3D spoke to its continuous improvement plan as well as new functions in the product. A new Productivity Pack has been added as well as a Service Pack, with improvements to better support line types for export to DGN with better visual fidelity. Later this year second Productivity Pack will be released, around the time of AU in December.

Some of the items in the first Productivity Pack include:

Coming soon is a new Transportation Extension with report generation and tools that were created for U.S. Department of Transportation customers. These will be available in the Toolbox.

Several modules are now available to subscribers, including:

A new Revit Civil Structures will allow you to import a Civil 3D corridor into the Revit family of tools, including superstructures.

Autodesk has an IdeaStation for Civil 3D where users can post suggestions, wish lists, and help prioritize enhancements. http://forums.autodesk.com/t5/custom/page/page-id/Ideas-Page The product team also interacts via the Civil 3D Futures portal (civil3d.futures@autodesk.com) with an ongoing beta process with an incremental approach throughout the year rather than one massive beta each year.

Harlan Brumm, Revit product manager, spoke to Revit 2016 R2 release with a focus on software performance with a number of improvements, however these enhancements are embargoed for now. Autodesk is hosting an all-day Revit Answer Day on Oct. 7 that users should consider attending as it’s a full-day event with direct access to product developers.