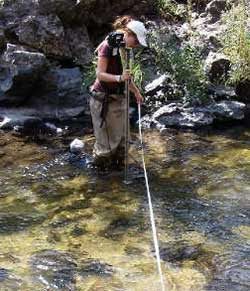 SEATTLE – U.S. Geological Survey hydrologic technicians are currently taking measurements from hundreds of streams and rivers across the western United States as part of a low flow study.

In August and September, USGS hydrologic technicians will measure stream flow and water temperature in hundreds of rivers and streams in California, Idaho, Nevada, Oregon, Utah and Washington to document the severity of this year’s drought.

“This year’s warmer, drier weather provides a preview of how future droughts may impact water resources in the study area,” said Chris Konrad, USGS hydrologist and study project chief. “The goal is to provide information to resource managers to help understand differences in how streams respond to drought and plan for future drought impacts throughout the region.”

With less spring and summer snowmelt at higher elevations, many western rivers and streams reached their peak flows earlier than normal and are now at or near historically low flows. These conditions create stresses on domestic and agricultural water supplies, fish and wildlife, and forests and rangelands.

“This is a large scale study including six states, nearly 500 streams and rivers, and dozens of technicians,” said Rich Ferrero, USGS Northwest Regional Director. “The streamflow data will be important for future drought planning and resource management decisions throughout the western United States.”

Hydrologic technicians from USGS water science centers are measuring streamflow and USGS scientists will then compare those data with measurements from previous years to answer several water-management questions, including:

The data will be compiled and analyzed with a summary report of findings planned for publication in late 2016.