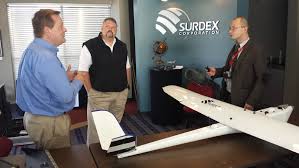 Surdex Corporation has received a 333 Exemption from the FAA to operate an Altavian Nova F6500 Unmanned Aerial System (UAS). This 333 Exemption provides Surdex with a general Certificate of Authorization (COA) to operate UAS under 200 feet throughout the U.S. for the purpose of aerial data collection.

Surdex owns and operates an Altavian Nova UAS for use in large scale aerial mapping applications. This capability will enhance the company’s geospatial data production capabilities by allowing rapid deployment and high resolution products to be generated in a timely and cost effective manner. Surdex is currently expanding this 333 Exemption to include other fixed wing and rotary aircraft.

Surdex Corporation (http://www.surdex.com), one of the country’s premier geospatial services companies, employs almost 100 people and operates 10 aircraft out of Spirit of St. Louis airport outside of St. Louis, Missouri.