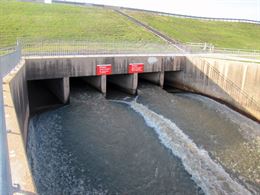 DALLAS—U.S. Army Corps of Engineers flood risk reduction projects in the south central and southwestern United States prevented an estimated $13.3 billion in damages to local communities and infrastructure during the May-June 2015 flood event , according to recent calculations by Corps officials with the Southwestern Division in Dallas. The most damages prevented were in the greater Dallas-Fort Worth area, where the figure stood at $6.7 billion. Closely following was the greater Houston area with $6.4 billion in flood damages prevented.

“The Army Corps of Engineers flood risk reduction infrastructure—constructed, operated, and maintained with our great partners at all levels—and the benefit that it provides to our nation came to the forefront during this year’s extreme rainfall event, and our structures performed as designed,” said Brig. Gen. David C. Hill, Southwestern Division commander. “The fact that more than $6 billion in damages were prevented in both the Dallas-Fort Worth and Houston areas—the nation’s fourth and fifth largest metropolitan areas—underscore the very robust and tangible benefit this infrastructure provides, along with the other key benefits that our lakes provide throughout the region: hydropower, water supply, and recreation.”

May 2015 was the wettest month on record for both Texas and Oklahoma, and set numerous records throughout the region. Continuing rains from Tropical Storm Bill in June resulted in Army Corps of Engineers flood risk reduction reservoirs and other systems put through a rigorous test to hold the floodwaters and protect local communities and downstream areas.

The breakout for the $6.7 billion in the Dallas-Fort Worth area includes the following: $1.2 billion in damages prevented by the flood damage protection at Grapevine Lake; $2.5 billion at Lake Ray Roberts; and $2.4 billion at Lewisville Lake.

The figures for the $6.4 billion in the greater Houston area include the following: $4.3 billion in damages prevented by the Houston Flood Channel improvements (Brays Bayou and Sims Bayou) and $2.1 billion by the Buffalo Bayou reservoirs (Addicks and Barker reservoirs).

During this flood event, the Southwestern Division had 51 flood control lakes in flood pool and 23 in surcharge pool. Eight new pools of record were set. The Division was in an emergency operation status for two months, which was also the length of time that the McClellan-Kerr Arkansas River Navigation System was not navigable by industry. Corps projects sustained approximately $209 million in damages, much of that at its recreation sites on the lakes. The Southwestern Division covers some 2.3 million acres of public land and water across five states.