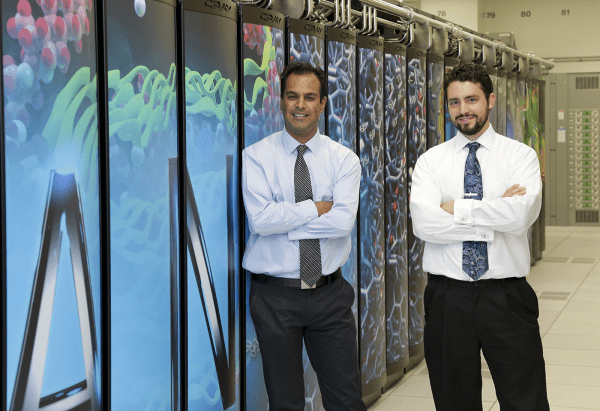 ORNL principal investigator Joshua New, in collaboration with a team of researchers, developed the automated calibration software, which reduces the amount of time and expertise needed to optimize building parameters for cost and energy savings.

By cheaply producing calibrated building energy models, Autotune allows “no-touch” audits, optimal retrofits and other simulation-informed applications to be cost-effectively realized for buildings traditionally too small (below 50,000 ft2) to be serviced by industry.

“Instead of having a human change the knobs, so to speak, the Autotune methodology does that for you,” BTRIC researcher Jibonananda Sanyal said.

To develop their software, the team used DOE supercomputing and computational resources — including ORNL’s Titan supercomputer and the National Institute for Computational Sciences’ Nautilus system — to perform millions of EnergyPlus simulations for a range of standard building types with generated data totaling hundreds of terabytes. Titan resides in the ORNL Leadership Computing Facility, a DOE Office of Science User Facility.

By mining this data and trying many different calibration algorithms, the researchers were able to identify techniques and evolutionary computations that can quickly evolve a building to match measured data. On Titan, the team has been able to run annual energy simulations for more than half a million buildings and write 45 terabytes of simulation output to disk in less than one hour using over a third of Titan’s nearly 300,000 CPU cores in parallel.

The code made available contains: (1) a backend that performs the evolutionary calibration, (2) a web service that allows scripting for calibrating large numbers of buildings and (3) a front end website which allows users to interact with the software.

Autotune is available via Github, https://github.com/ORNL-BTRIC/Autotune.

The study was supported by DOE’s Office of Energy Efficiency and Renewable Energy – Building Technologies Office, and the DOE Office of Science.

UT-Battelle manages ORNL for the Department of Energy’s Office of Science. The Office of Science is the single largest supporter of basic research in the physical sciences in the United States, and is working to address some of the most pressing challenges of our time. For more information, please visit http://science.energy.gov/.