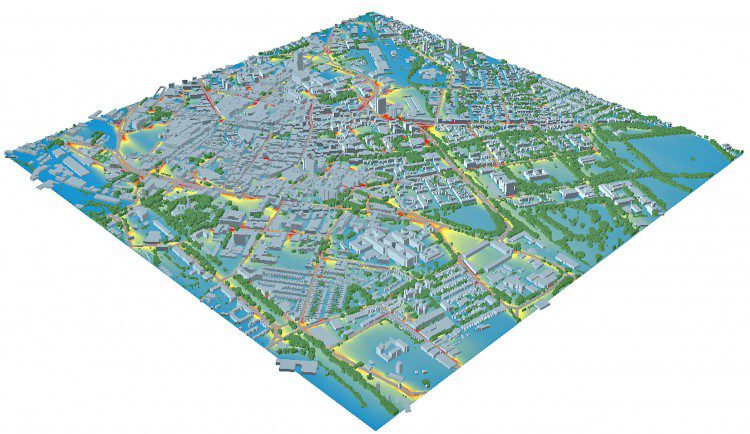 Leicestershire, Sept. 3, 2015 – Aerial mapping company Bluesky has supported a major research project by scientists from the University of Leicester into the role of trees on pollution dispersion. Using a range of geographic datasets, including Bluesky’s National Tree Map, the team was able to create a detailed 3D model of Leicester. Air quality measurements from a network of fixed and mobile sensors were then added to the model to give a representation of pollution at multiple locations and at different times of the day. The team from the University of Leicester’s Department of Physics and Astronomy concluded that trees have a regionally beneficial impact, increasing air turbulence and reducing concentrations of road traffic emissions by up to seven per cent.

PhD Researcher Antoine Jeanjean who led the project said, “Predicting the concentrations of air pollutants is essential for monitoring air quality in cities. We can now reveal that fears that trees may trap pollution are unfounded. While in some situations they can increase pollution at a local level, on average their impact is beneficial in terms of pollutant dispersion.”

The study focused on the city of Leicester, where up to 90 per cent of some atmospheric pollutants such as NO2 is emitted by traffic. The city also has a high density of building and significant traffic congestion. The researchers found that while trees reduced air quality by trapping pollutants in some street canyons in the city, city wide they decreased the amount of pollutants around pedestrians. The study also found that while trees decrease the wind speed over the city, they also produce more turbulence which helps disperse the pollution emitted by traffic. In addition to increased dispersion of pollution, trees have other well documented benefits in the urban environment, including reduced stress, noise suppression and the chemical and physical removal of certain pollutants.

Dr Roland Leigh from the University of Leicester’s Department of Physics and Astronomy and a member of the University’s Air Quality Group added, “This study highlights the importance of combining local and regional scale models for assessing the impact of trees in urban planning.”

James Eddy, Bluesky’s Technical Director and Industrial Associate at the University of Leicester, commented, “Basing this type of study on the most up to date and accurate geographic data, such as the National Tree Map, allows for the results to be validated and the studies replicated for other locations and types of environment, further enhancing our understanding of air pollution and the important role played by trees.”

The Bluesky National Tree Map has been created using innovative algorithms and image processing techniques in combination with the most up to date and detailed aerial photography and height data in the UK. A team of experienced professionals then completed an exhaustive QA process to ensure the quality and accuracy of the data. In addition to the three vector map layers; Crown Polygons, Idealised Crowns and Height Points, the Bluesky National Tree Map also includes an attribute table including unique identification for each crown feature, height attributes and area calculations. The data is available in a range of GIS ready formats with flexible annual licencing.

Bluesky National Tree Map is currently available for England and Wales with work already underway to create coverage for Scotland.

Bluesky has unrivalled expertise in the creation of seamless, digital aerial photography and maintains national “off the shelf” coverage of aerial photography, DTM and DSM through an on-going update programme.  By purchasing a World first sensor for the simultaneous capture of LiDAR, Thermal and Aerial Photography data Bluesky is in the enviable position of being able to provide customers with unique and cost effective solutions.

The Natural Environment Research Council (NERC) is the largest funder of environmental science in the UK. We invest £330m in cutting-edge research, training and knowledge transfer in the environmental sciences. Our scientists study and monitor the whole planet, from pole to pole, and from the deep Earth and oceans to the edge of space. We address and respond to critical issues such as environmental hazards, resource security and environmental change. Through collaboration with other science disciplines, with UK business and with policy-makers, we make sure our knowledge and skills support sustainable economic growth and public wellbeing – reducing risks to health, infrastructure, supply chains and our changing environment.