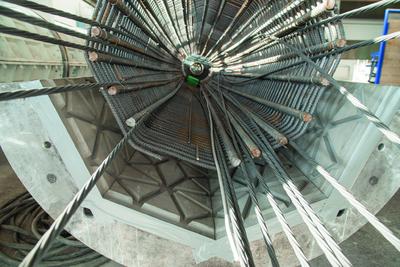 The world’s third-largest mosque is currently being built right in the heart of the Bay of Algiers seafront development. A special role in the architecture of the building is played by 618 white octagonal columns. The columns were manufactured and supplied by Europoles GmbH & Co. KG, Neumarkt, Upper Palatinate, Germany. The company opted to use NOEplast textured formliners from NOE-Schaltechnik, Süssen, Germany to give the columns the required ornamentation.

The Djamaâ el Djazaïr mosque (Mosque of Algiers) currently being built in Algiers will be a place of worship that would stand easy comparison with many of the world’s other giant religious buildings. For example, the mosque dimensions are greater than those of St. Peter’s Basilica in Rome. The 265 m high minaret beats the previous record holder in Casablanca by quite a margin. The place of worship was designed by KSP Jürgen Engel Architekten from Frankfurt, whose architects saw their concept for the mosque columns as crucial in the design of the whole mosque. They fulfil not only a loadbearing function in the building; they are also an architecturally defining element. In arriving at their aesthetic form and skilful arrangement for the columns, the architects succeeded in creating a mosque with an airy, light-filled appearance, despite its gigantic dimensions.

The design calls for a total of 618 octagonal columns. They are extremely slender, snow white and up to 32 m tall. Because they define the building’s architecture, it is important for their edges to be sharp and their surfaces defect free. To ensure this was the case, Europoles from Neumarkt in Germany’s Upper Palatinate region was selected to manufacture the columns. The company specialises in manufacturing masts (e.g. for power lines) in spun concrete. The factory team introduces concrete into a long tubular form, which rotates about its longitudinal axis at speeds of up to 800 revolutions per minute. This causes the concrete to be pressed against the form walls with a force generated by the equivalent of 20 times the earth’s gravity, which results in an extremely uniform and cavity-free concrete surface. The centrifugal forces create a void in the middle of the tube. This void is used in the mosque for drainage and for routeing the cables for cameras and lighting.

In addition to their perfect surfaces, one third of the columns have a continuous relief representing a typically oriental ornamental feature. The Europoles management team immediately recognised that this kind of eye-catching decorative feature would require the utmost precision. To be certain of success, Europoles formed the relief with the help of NOEplast. These textured formliners from NOE-Schaltechnik are notable for the high precision of the moulded shapes they produce. The formliner mats need only to be laid or glued into the formwork – depending on whether they are being used for precast or insitu concrete components respectively. All subsequent steps are the same as for normal concreting. This means the user can pour, compact and cure the concrete in the usual way. Then the formwork is removed and the chosen texture exposed to view. The manufacture of the columns proceeded in a similar way at Europoles. The Europoles factory staff had to pay particular attention to ensuring that the butt joints at all eight column corners each formed a smooth harmonious line.

Because the columns have different diameters, NOE-Schaltechnik adjusted the star-shaped pattern on the formliners to suit the various dimensions of each column. Thus it could be ensured that the relief would look like a beautiful, continuous band. The template for the arabesque motif was created by the architect’s design staff. NOE-Schaltechnik manufactured the formliners individually according to the architect’s aesthetic requirements. As well as special motifs, NOE-Schaltechnik also offers an extensive range of standard textured formliners. These include various stone and masonry textures, floral motifs and much more. These formliners provide a very simple way of giving interior or exterior concrete surfaces an individualised appearance. After the Europoles operatives take the columns out of the formwork, they have still to undergo a further process. The surface is inspected, any fins removed and the columns carefully packed for transport.

The 32 columns in the prayer hall are over 32 m high. They could not be cast and transported in one piece. Instead, Europoles made them in three pieces, which were each 10 m long and 34 tonnes in weight. They were butt-jointed together in Algiers using dowel and socket connections. The cavity between the dowel and the wall was filled with a flowing concrete mortar. The engineers designing the columns had to take into account the location of Algiers in an earthquake-prone region. Every column in the mosque supports 125 square metres of roof and carries a load of 6.0 meganewtons. To prepare the building for a seismic event, the engineers designed the concrete in the columns to fail before any other element. The reinforcement cage in the columns, on the other hand, must remain as intact as possible and be capable of supporting the roof. Only in this way would a sudden collapse of the building be avoided and the visitors given a chance to flee to safety. The hope remains that the building will never be exposed to such a catastrophe and the worshippers can spend their time undisturbed in those beautiful spaces.

The mosque is due to be completed by the middle of 2017.