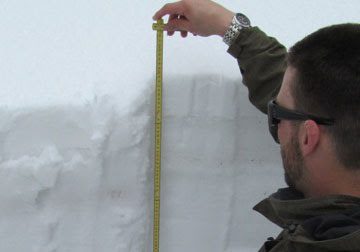 August 19, 2015 – Most of us have strong opinions about snow during the winter. For some, it’s a curse. Others enjoy the recreation heavy snowfall brings. Yet, once warmer weather comes, we tend to forget about those piles of fluffy white stuff that once towered over our driveways.

In mountainous regions, snow cover plays a critical role in water supplies. Typically, melting snow meets with three fates. It can run off the surface of the soil.  It can evaporate and return moisture to the air. Finally—and most importantly—it can replenish underground water levels. This process is groundwater recharge.

Changing climate conditions have caused dramatic changes in groundwater levels. “The lower than historically normal snowfall in recent years is one environmental factor that has contributed to the current drought in California,” says Ryan Webb, a Ph.D. student in the department of civil and environmental engineering at Colorado State University.

Webb’s group recently published a study aimed at understanding the changes in soil wetting and drying that occur as snow melts in mountainous, snow-packed regions. The study examined subsurface water content levels in the Sierra Nevada mountains in California. In these regions, soils do not freeze during the winter and remain wet beneath the snowpack.

Instead, the study used a computerized network of moisture sensors—97 in all, buried at various depths. The sensors were located at varying elevations (1,750-2,000 meters) and types of slopes (north, south, or flat). In addition, the study considered the type of tree cover: open, drip edge, or canopy. The researchers took soil moisture measurements directly beneath snow depth measurements, so they could relate these two measures.

Curiously, Webb and coworkers found melting snow could produce highly variable results within the top meter of soil. “One set of sensors could experience quite different wetting and drying dynamics, relative to a sensor only a couple of meters away,” says Webb. This variability persisted at different measurement sites and under different tree cover conditions.

Many soil moisture studies use uniform, one-dimensional models. Webb’s results suggest such models will either over- or under-estimate the amount of groundwater recharge, depending on the location and depth of the sensors used.

Webb concludes that further study will help us understand why groundwater recharge from melting snow is so variable. He adds, “Long-term periods of record could be used to conduct a similar study over a longer timescale.”

Ultimately, these studies will help understand how climate change impacts groundwater supplies—a precious resource in drought-stricken areas of the country.

Read more about Webb’s research in Vadose Zone Journal. The co-authors of the paper are Steven R. Fassnacht and Michael N. Gooseff.  Data for this study were provided by the NSF-supported Southern Sierra Critical Zone Observatory.