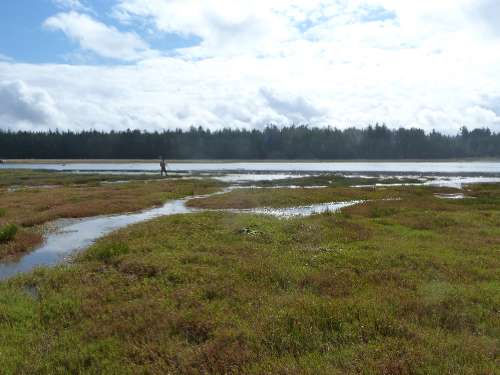 CORVALLIS, Ore., Aug. 14, 2015—The U.S. Geological Survey and Oregon State University released a report this week examining Pacific Northwest tidal wetland vulnerability to sea level rise. Scientists found that, while vulnerability varies from marsh to marsh, most wetlands would likely be resilient to rising sea levels over the next 50-70 years. Beyond that time, however, most wetlands might convert to intertidal mudflats as sea level rise outpaces the capacity of tidal marshes to adapt.

Coastal wetlands provide economic and recreational benefits to local communities by creating critical habitat for important local fisheries. They also support a wealth of ecosystem services such as water purification and flood protection. Until now, the vulnerability of these critical habitats to rising sea levels had been poorly understood, leaving resource managers with little information for coastal adaptation planning or strategies.

“This information is timely and at the scale needed to help coastal resource managers plan for climate change,” said USGS project lead, Karen Thorne. “One clear result is that wetlands are more vulnerable to sea level rise in areas with higher human impacts to the local ecosystems.”

The research aims to inform tidal marsh management of vulnerabilities along Washington and Oregon coasts and is part of a larger effort to examine tidal marshes from Washington down to the border with Mexico. Scientists took a thorough snapshot of current conditions at nine tidal marshes, measuring elevation and current range of low and high tides, and mapping plant life and current and historic rates of sedimentation. The group then used models of sea level rise to calculate vulnerability for each marsh, testing whether vulnerability varies from north to south or among wetlands. Two coastal National Wildlife Refuges, Grays Harbor and Willapa Bay in Washington, appear to have the most resilience, persisting as low marsh for at least the next 100 years. But sea level rise will eventually outpace marsh growth and drown most high and mid-marsh habitats by 2110.

The study was a partnership of the USGS, Oregon State University and the University of California, Los Angeles. The work was supported by the DOI Northwest Climate Science Center, which is managed by the USGS National Climate Change and Wildlife Science Center. The center is one of eight that provides scientific information to help natural resource managers respond effectively to climate change.

The final report is available online. Additional project information can be found at the USGS Western Ecological Research Center.