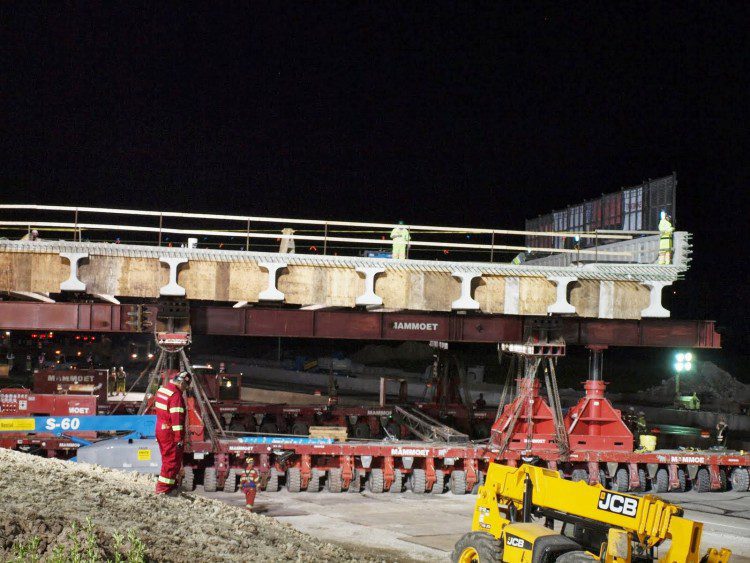 The Wisconsin Department of Transportation (WisDOT) is in the midst of a major project to rebuild the I-94 North-South freeway, one of the state’s most frequently used roadways. The freeway is being widened to eight lanes from the Wisconsin/Illinois border to Milwaukee, with new bridges and interchanges along the full 35-mile stretch.

In addition to this freeway work, frontage roads and main arteries are being reconstructed and moved. In total, 17 interchanges are being completely redesigned, encompassing more than 50 bridges. The new designs replace outdated and dangerous configurations with standardized designs that place ramp exits on the right side of the freeway. The phased project work across Milwaukee, Racine and Kenosha counties began planning in 2000 with construction starting in 2009, and it’s projected to last until 2021.

Rawson Avenue, a major intersection in Oak Creek, south of Milwaukee, was selected by WisDOT as a candidate for a new means of offsite bridge construction to minimize disruption. An innovative construction technique using Self-Propelled Modular Transporters (SPMTs) was chosen, with a finished bridge superstructure rolled into place rather than constructed onsite. By constructing the bridge this way, the 112,000 vehicles per day on I-94 below were minimally impacted, and the 43,000 vehicles that travel across the bridge each day only had to be detoured for three weeks vs. a typical six-month construction process. 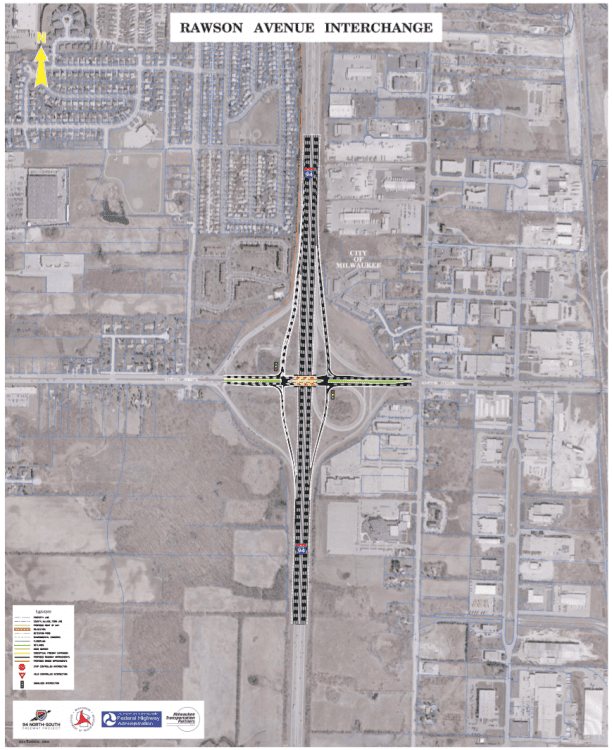 The new tight diamond interchange configuration afforded the necessary room to build the superstructure adjacent to the bridge site and move it in place via Self-Propelled Modular Transporters.

Not all bridges are qualified for such accelerated construction, as the site needs to meet several criteria. The fact that the interchange design was being transformed into a tight diamond configuration was one of the leading factors in choosing this bridge project.

“This project was a candidate for SPMT because there was room to build the bridge offsite,” says Joshua LeVeque, PE, SE Region project manager, WisDOT. “You need a lot of room and level terrain to build the superstructure.”

Several considerations made the superstructure building site tricky. The environmental assessment uncovered a snake habitat on the project area’s south side, and there’s also a power pole on the south side that needed to be avoided, as overhead power lines are an obstacle when moving the structure. Drainage and the existence of wetlands also were taken into consideration.

“When you’re building the superstructure offsite, it’s going to be very big and heavy,” says LeVeque. “The bridge staging area had to be built to a specific requirement for size and shape, how much stone was placed under it, as well as matching the grade for transport onto the roadway.” 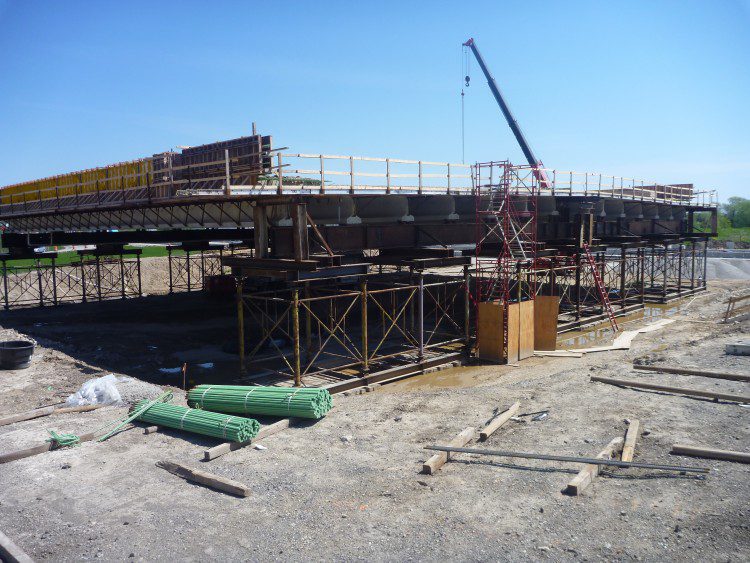 Bridge superstructures were constructed on temporary shoring towers in staging areas near the interchange.

The Rawson Avenue overpass is an entirely new design, with a wider bridge span to accommodate a wider roadway section on Rawson Avenue, and from three lanes to four lanes on I-94 below. Bloom Companies LLC had just finished designing 11 bridges for the I-94 North-South Freeway Project (including the Rawson Avenue Bridge) when WisDOT asked them to redesign this bridge for accelerated delivery.

Bloom was responsible for bridge design, but the full plans of the roadway, signage, erosion control and overall plans were done by WisDOT. The use of SPMT required special considerations in the bridge design as well as overall project planning.

“The plans have to be done in a way to allow for proper construction tolerances to accommodate moving the bridge superstructure into place, more so than with typical construction techniques,” says Jason Sadowski, PE, SE, project manager at Bloom Companies. “There were bearing shims and other details specified in the event that the elevations were a little bit off, for instance.”

Another major part of the design had to do with analyzing deflections in the bridge and determining allowable tolerances for twist. The heavy lifters have to know and monitor the differential deflection from one corner of the bridge to the other to ensure that if they hit a low spot or other surface change during the move, the allowable stresses aren’t exceeded. They also need to know details on loading, the weights they’re going to have to lift, and other limits placed on them.

“We used a variety of 3-D finite element models to analyze the stresses and make sure the limits weren’t exceeded,” adds Sadowski. “The main thing was to ensure that we didn’t damage anything during the move, and that we delivered a bridge in the same condition as if it were built in place.”

Lifting a bridge reverses the stresses in the deck to the opposite of what they’re typically designed to carry. During the design process, tension stresses needed to be considered, and additional steel reinforcement within the deck was added in high-tensile-stress regions. The design incorporated larger-than-typical steel reinforcement into the deck ends and parapets to control cracking. Control joints also were added at close intervals on the parapets and sidewalk to provide stress relief. This approach proved highly successful, as no significant cracks were observed after transport was complete. 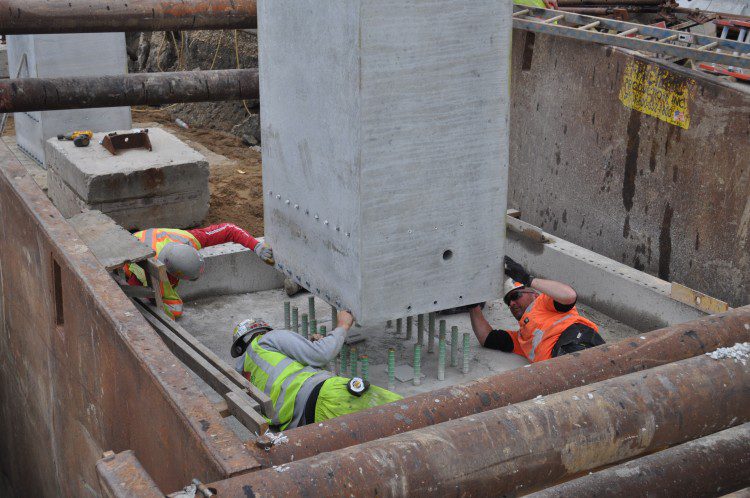 A precast column is carefully set in place on top of new footings (top), saving time in the sequencing of construction.

This type of SPMT project has typically been delivered under design-build contracts, where the contractor works with the heavy lifter from the beginning to plan out exactly how they’re going to approach construction and the path to the final resting spot. Due to Wisconsin’s mandated design-bid-build process, the design had to factor in several considerations to provide leeway for the contractor.

“We had to make some assumptions about how construction would proceed on this project, and we had to provide a finished design to them that didn’t restrict their means and methods,” adds Sadowski. “This was unique work that a lot of the contractors around here haven’t been exposed to, and we needed to give them plans and specifications in a way that provided room for them to innovate and do things that were most effective for them.”

The project used precast concrete spans, which are heavier than steel, that were set on top of shoring towers with the concrete bridge decks and sidewalks, then cast in place. The staging area used steel plates on top of the required fill to accommodate this heavy weight and ensure very little settling or low spots.

The contractor gained some advantages with the offsite superstructure construction, because they could design and sequence the operations in a safer manner, without moving materials above traffic.

The ability to control more parameters on the offsite build ultimately translates into a higher-quality product, with more attention to detail and less pressure on the process, because builders can focus on work operations and the timeline, as the work isn’t under the pressure of the deck needing to accommodate traffic until it’s moved into place. 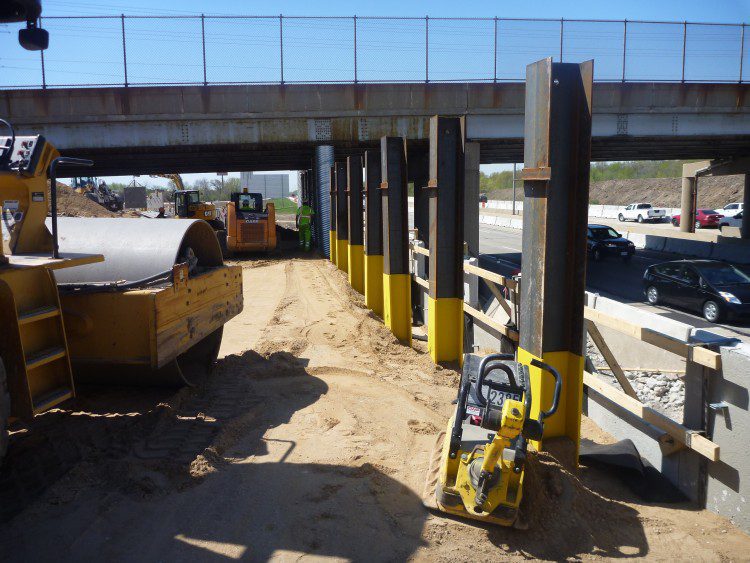 Some work on the new pilings (foreground) was able to take place before demolishing the existing bridge (background).

The Federal Highway Administration is championing Accelerated Bridge Construction techniques of many types with its Every Day Counts Initiative. Using SPMTs is one of many options. Building the superstructure offsite, demolishing the old bridge and then moving the new bridge into place is a coordinated effort that offers timeline advantages over typical construction. With the bridge elements physically separated, the contractor can build the bridge elements concurrently rather than sequentially.

“They are working on the substructures, the piers and abutment, at the same time that they work on the superstructure,” says Sadowski. “That allows a major time savings, because you’re able to work on everything at once.”

Bridge superstructures were constructed on temporary shoring towers in staging areas near the interchange. A precast pier was used as well, with the precast pier columns and cap units fabricated offsite and erected within a few days, drastically reducing the time it would’ve taken to construct the pier in place. Most of this work was accomplished while the existing bridge remained in service.

“As we were looking at the schedule, and how we were able to compress the schedule with SPMTs, we realized that the construction of the substructure (and specifically the piers) was holding us back,” notes Sadowski. “The cast-in-place pier construction was controlling how quickly we would be able to get this re-opened to traffic. The best way we found to improve the timeline was to use a precast pier, so we were able to get that constructed in roughly the same amount of time as they were constructing the abutments.” 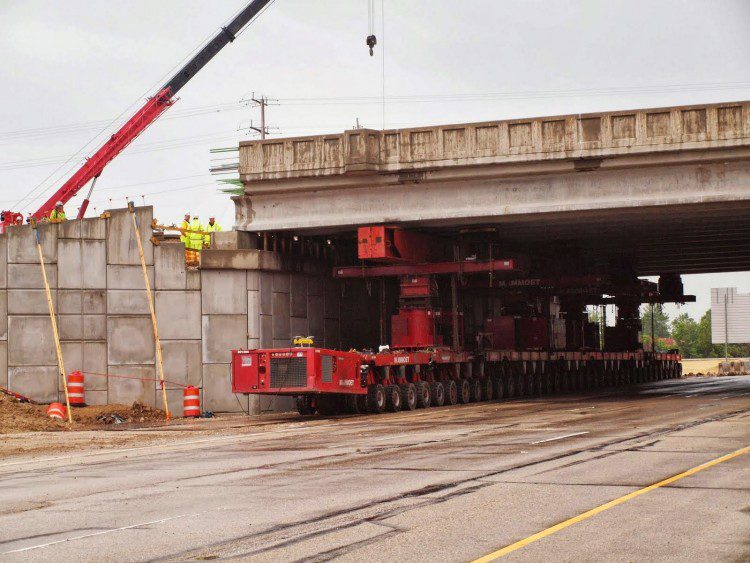 The SPTMs took time to set up in the staging areas and fine-tune the final placement. Transport of the bridge superstructure in two sections took place at a walking pace and was the least time-consuming element of the 12-hour process.

The SPMT is a motorized multi-axle heavy-lifting mechanism controlled through a computerized handheld controller. The lifter can pivot 360 degrees in place and can lift, carry and set its load within a tight tolerance. If the operator notices that they hit the limit of deflection (twist) as they move at a walking pace, they’re able to adjust the vertical height of each axle, get everything back to level and then proceed with the move when it’s back within design tolerances.

With adherence to a standard Wisconsin bridge, and the double-span configuration, the bridge was designed with closure pours in the center span and at abutment ends. This design added onsite work, and final finish took just two weeks to accomplish, timing neatly with road closures and other widening work being done on Rawson Avenue. Other SPMT bridge projects have been accomplished with tighter timeframes that had the bridge operational within hours, but this project’s objectives and design constraints made that impractical and undesired.

The project was Wisconsin’s first use of SPMTs to rapidly construct a bridge, which reduced costs for motorists using the bridge and increased safety for the public and construction workers. It also was Wisconsin’s first bridge to incorporate a precast concrete multiple-column pier and was one of the nation’s first SPMT projects delivered by the design-bid-build process. I-94 was closed for only 12 hours during the SPMT move, and Rawson Avenue was closed for only three weeks. This tight timeline set new precedents for interstate bridge construction in Wisconsin. 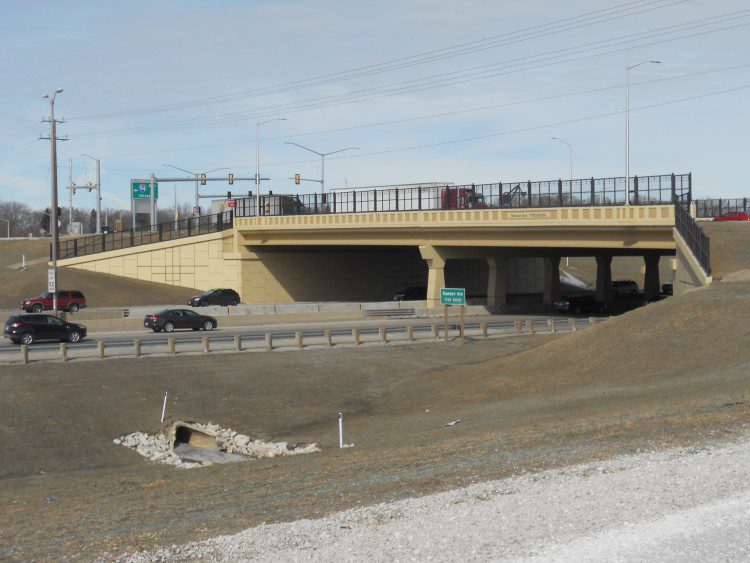