Realigning the Future of Torrington, WY 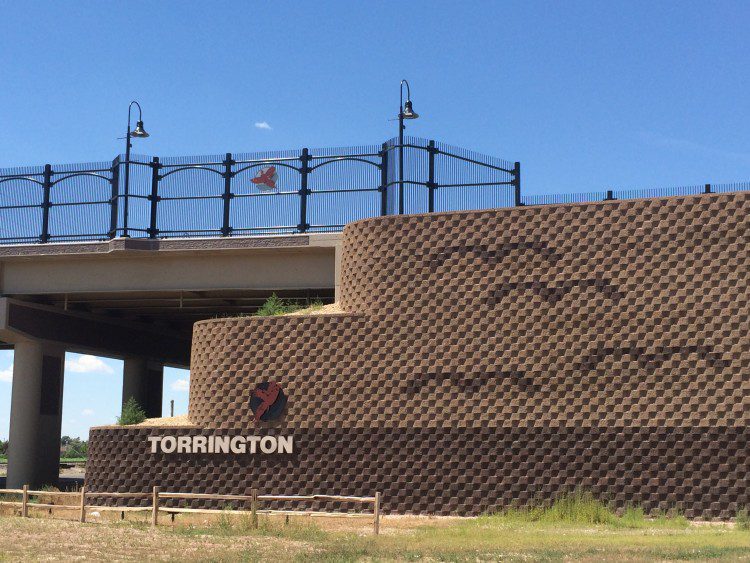 A town of 7,000 residents of Torrington, WY has found itself surrounded and bisected by trains for nearly 30 years. The BNSF railroad runs through the middle of the town, resulting in no less than five public at-grade crossings throughout town. One of the most heavily trafficked crossings is that of US 85. In order to travel south on US 85, motorists must first cross the railroad tracks. In order to cross the tracks, drivers must deal with the normal flow of traffic combined with the additional car traffic from commuters at Holly Sugar (a major employer for the area) and heavy train traffic; resulting in the perfect recipe for congestion.

The realignment of US 85 in Torrington is a project 30 years in the making. Mike Varney, Mayor of Torrington, said (in a television interview with local station KOTA) the city first began discussing plans to separate the railroad crossing from US 85 in 1979. According to BNSF, in 2005 the US 85 crossing was closed over three hours per day due to train traffic. Estimates predicted trains would close the crossing by as much as five hours per day by 2025.

It was not until late October 2012, when efforts to realign where US Highway 85 enters Torrington, WY finally began. Prior to construction, travelers along US 85 were met with a stop light just two car lengths ahead of the railroad tracks. A major undertaking, the realignment will significantly reduce the town’s train traffic congestion, improve safety on the roads and drastically change the look of Torrington.

The retaining wall was constructed around pre-driven bridge pylons, allowing the crew from Reiman Corp, the jobs general contractor, to work on the bridge while the wall installation took place.

“We had to get under the bridge in some places to install wall units,” explains Miller. “With the wall being one sided, and the dirt crew needing to bring a large volume of material onsite, space was limited.” Wall installers worked in unison with the dirt crew to ensure the retained material was built to the same height as the wall. Native materials were not used for the walls backfill. Instead, well graded crushed base was trucked in from an off-site manufacturer. “We had trucks driving right behind the wall, near the grid,” said Miller.

The installation crew overcame more than just tight work space in order to complete the job. “We had a nasty winter,” explains Miller. “We faced a lot of cold weather and frost. The crew raced against Mother Nature to build the wall to a height that allowed bridge structures to be poured so work could continue through the winter.” Reaching heights of 31 feet in some places, crews installed Tensar® geogrid every three courses, on average, throughout the entire height of the wall.

The use of grid provided the necessary reinforcement to ensure the retaining wall structure remained stable as the height of the wall increased.

Those passing through Torrington will never see the grid within the wall; they will see the birds, a design element added by the project’s landscape architect. Each bird uses full-sized Keystone Compac units in a color different from the rest of the wall. “Not only did we have to keep the materials separate, we had to stack the units for the birds as we built the wall,” says Miller. “We had a guy on the ground who would coordinate with the guy laying the block. The exact station and elevation of each colored unit had to be noted so we could be sure when installation was complete it actually looked like birds.”

Construction on the realignment is still ongoing, though installation on the wall was completed in early April 2013. When complete in spring 2014, US 85 will enter the town over the existing UPRR/BNSF mainline railroad tracks, as well as US 26.