/ Corporate / Which U.S. Cities Have the Most Red-Light Running Fatalities?

Which U.S. Cities Have the Most Red-Light Running Fatalities? 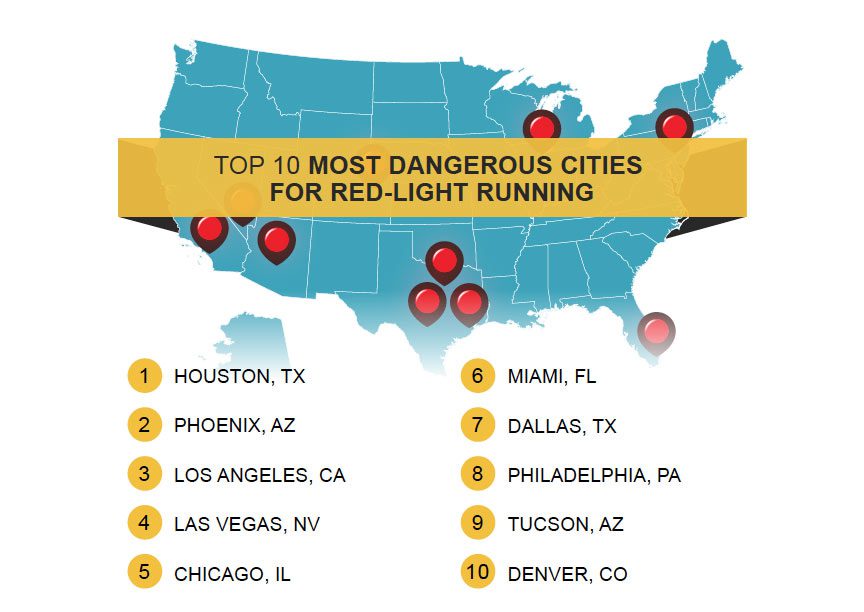 Today, the National Coalition for Safer Roads (NCSR) launched an interactive map that showcases the 7,799 red-light running fatalities that occurred in the United States between 2004 and 2013.

The fatalities are mapped to the city and state that each incident occurred, all the way down to the actual intersection where someone’s life was taken by a collision involving red-light running. Through its search function, the map allows viewers the opportunity to find out how many red-light running fatalities occurred in a particular city.

“The ultimate goal is to honor the lives lost and illustrate the danger of red-light running,” said NCSR President Melissa Wandall, who lost her husband to a red-light running in 2003. “These dots represent a life cut too short, family and friends left to soon, and the harsh reality that red-light running can affect anyone on the roadways if more action isn’t taken to prevent reckless driving.”

The map, which features data from National Highway Traffic Safety Administration’s Fatality Analysis Reporting System (FARS), was designed as a key component of NCSR’s efforts during National Stop on Red Week. Stop on Red Week, August 2-8, 2015, aims to educate drivers about the dangers of red-light running and reduce the number and severity of crashes.

NCSR will encourage people who have been personally affected and lost loved ones in these types of traffic collisions to share their stories on NCSR’s Facebook page. In addition, NCSR hopes to mobilize others across the nation to share the map on social media, change their profile pictures to the Stop on Red icon and pledge to Stop on Red by signing thepetition. They are also encouraging people to show their support via social media using the hashtag #StoponRed2015.

For more information about NCSR’s Stop on Red Week daily activities and ways you can get involved, visit www.StopOnRedWeek.com.

About National Coalition for Safer Roads

The National Coalition for Safer Roads helps save lives and protect communities by demonstrating how red-light safety cameras can improve driver behavior. NCSR brings together policymakers, community leaders and concerned citizens in support of red-light safety cameras, advocating for their use in cities and communities across the country. The National Coalition for Safer Roads is a 501 (c)(6) industry trade association. To learn more, please visit www.NCSRsafety.org, follow@SaferRoadsUSA on Twitter and on Facebook at http://www.facebook.com/SaferRoadsUSA.

At @autodesku , the learning never stops. Join the conversation and take your career to the next level.… https://t.co/vBnfjTQkRX
sometime
@BentleySystems Issues Call for Nominations for the Year in Infrastructure 2020 Awards Program https://t.co/YUJ7GcJwTs #YII2020
sometime
@awwa Meet the Water operators at the Annual Conference & Exposition (ACE) & be sure to express your gratitude for… https://t.co/zfSRFxUA8i
6 days ago
@Wipro Wipro and @SmartEnergyW (SEW) form global strategic alliance to accelerate #DigitalTransformation for enterp… https://t.co/UPeRBLc4Wa
2 weeks ago
DFI Educational Trust and @terraconlife Foundation Announce a New Scholarship Fund https://t.co/t18FBN7Kd9
2 weeks ago
@Transoft Solutions Acquires Canadian-based @BriskSynergies https://t.co/hceegJKx4q
3 weeks ago
Video: Interview with CEOs of @BentleySystems and Topcon Positioning Systems @topcon_today https://t.co/38rRQNbNcO
3 weeks ago
New @ASCETweets Publication Explores Engineering Designs for Precipitation Extremes https://t.co/2OX0kg9cOg
3 weeks ago
@HNTBCorp Americans pay an average of less than $25 a month to maintain the roadways and bridges essential to mob… https://t.co/T6mrVfdibT
4 weeks ago
Sdiptech lists: Trends – and challenges for the #infrastructure sector 2020 https://t.co/4cuswAcecV
1 month ago