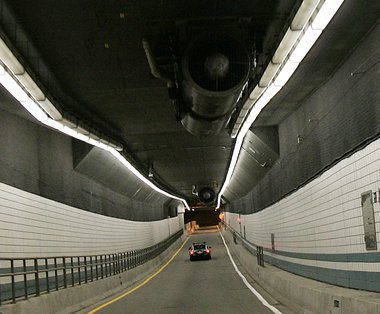 The history of tunnel construction dates back to 1556 when the authoritative mining tome “De Re Metallica” authored by Georgious Agricola was published. In 1850, the mining industry shifted from using black powder to nitroglycerine in the form of dynamite. Moreover, steam and compressed air technology became the standard for boring dynamite holes instead of hammer and chisel.

Shortly after, in 1884, a British engineer called James Greathead perfected one of the most enduring tunneling methods still used even today: tunneling shield. In 1900, civil engineers came up with a novel way of stabilizing soft soil while tunneling: embedding pipes with circulating coolant. By 1920, the use of liquid spray¬-on concrete or shotcrete became widespread. During construction of the Hoover Dam in 1931, drilling jumbos were used for the first time to dig tunnels required to divert Colorado River.

In 1954, American inventor James Bobbins gifted the world with the first Tunnel Boring Machine (TBM). Not to be outdone, Austrian engineers developed the New Austrian Tunneling Method (NATM) between 1957 and 1965. In 1970, the tunneling industry began the practice of injecting soft soil with liquid bonding agent or grout.

Major Tunnels in the US

The most prominent of these is the Delaware Aqueduct, which holds the enviable record of the longest tunnel in the world at 85.1 miles. Buried 1,500 feet underground, its diameter ranges from 13.5-19.5 feet. This concrete-lined tunnel is the backbone of the New York City water system. Passing under the Hudson River, the iconic 1.5-mile long Lincoln Tunnel connects Weehawken in New Jersey to New York City. About 108,655 vehicles pass through this tunnel each day going either way.

Another record-breaking tunnel is the Eisenhower Memorial. At its highest point, this road tunnel reaches 11,158 feet. Whittier in Alaska is home to the longest dual mode vehicle/rail tunnel in the US called Anton Anderson Memorial. It runs through a mountain and measures 2.5 miles long. The Ted Williams Tunnel in Massachusetts, Boston boasts of a four-lane 1.6-mile long road that has been operational since 1995. A significant portion (0.75 miles) of this I-90 extension link runs under the Boston Harbor.

Since the 1970s, tunneling techniques have advanced considerably. To start, Box Jacking has become a common technique used to construct tunnels that do not run deep underground especially below major roads and airport runways. TBMs are now widely used to tunnel underwater or under mountains. An alternative way of creating tunnels underwater is by installing pre-cast concrete tunnel segments in pre-dug trenches. A similar method known as cut and cover is used when building tunnels on dry land. This technique essentially involves excavating a trench, building a tunnel structure on it, and then covering everything with backfill material. When tunneling in areas with soft soil, it is standard to construct support structures to improve stability. In the US, the NATM method or Sequential Excavation Method involves integrating surrounding soil and rock material into a ring-like support structure. To succeed in the tunneling industry, one must have domain knowledge in structural, geotechnical, and construction fields.

Tunneling is a risky industry registering 204 incidents in 2010 out of which 36% were collapses. In addition, 28% of reported collapses occurred during the day. An 18-month study involving tunnel-jacking construction workers exposed to crystalline silica at levels exceeding OSHA safety guidelines and published in the American Journal of Industrial Medicine in 2006 found that 29% experienced shortness of breath. This is in addition to 25% with asthma-like symptoms, 10.7% with chronic bronchitis, and 6.6% with physician-diagnosed asthma. Take note players in the tunneling industry must comply with OSHA safety standard 20 CFR part 1926.800.

The Central Artery/Tunnel Project (CA/T) commissioned by the Massachusetts Turnpike Authority was one of the most innovative. It started in 1991 and finished in 2007 at a cost of $24 billion. Tunneling engineers involved in this project used clamshell excavators to dig narrow 3-feet wide trenches up to 120 feet deep. Moreover, they used side¬-by-side steel¬-and-concrete panels to build the tunnel walls. Positive outcomes of this project include reduction of CO2 levels in Boston by 12% via reduced traffic jams and creation of open spaces/parks covering more than 300 acres.

To learn more about tunneling the important role that civil engineers play in tunneling, checkout the infographic below created by the New Jersey Institute of Technology’s Masters in Civil Engineering Online degree program.