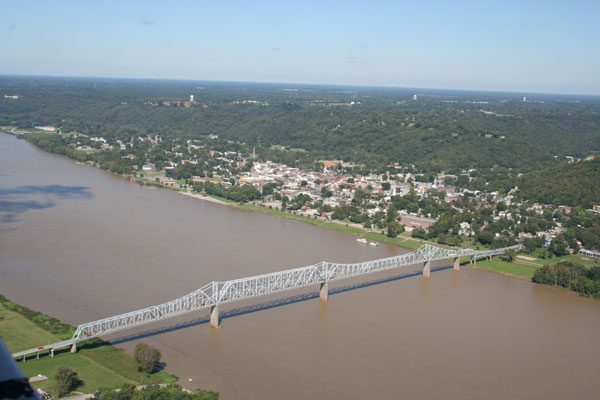 The Milton-Madison Bridge project, which resulted in a modern, four-lane bridge connecting Milton, Kentucky and Madison, Indiana, was declared a regional winner in the America’s Transportation Awards competition. The award was presented today at the annual meeting of the Southern Association of State Highway and Transportation Officials (SASHTO) in Nashville, Tennessee.

“This bridge project was a massive undertaking that could have created traffic issues for the citizens of Milton and Madison for more than a year. But our dedicated project teams identified a method to decrease that impact significantly,” Kentucky Transportation Secretary Mike Hancock said. “I am very proud of our project teams and gratified that their fine work has been recognized outside our Commonwealth. Innovative designs and timely completion of projects are indispensable as we work to deliver a quality highway program for the citizens of Kentucky.”

The Milton-Madison project was a winner in the category of Best Use of Innovation, Medium Project. The key to the project was a construction method called “truss sliding,” in which a new 2,427-foot-long truss constructed atop temporary piers adjacent to the old bridge was slid into place atop the old bridge’s piers, which were rehabilitated. The new span was opened to traffic in 2014, making it the fastest modern-day bridge built across the Ohio River.

A need to replace the old bridge, which opened in 1929, and a desire to keep traffic flowing resulted in the innovative construction process launched in August 2008 between the Kentucky Transportation Cabinet (KYTC) and the Indiana Department of Transportation (INDOT).

After a year of environmental studies and input from community, state and federal agencies, KYTC and INDOT determined that a method called “superstructure replacement” offered the fastest and most cost-effective way to build a safe, new bridge, while having the least impact on the historic towns and the natural environment. Superstructure replacement involves building a new steel truss atop existing piers.

With a low bid of $103 million – 20 percent below the original estimate – Walsh Construction Co. of Chicago began building the new bridge in the spring of 2011.

Due to the use of innovative bidding, design and construction methods, Walsh’s design-build proposal called for the bridge to be closed for 10 days during construction, rather than the anticipated yearlong closure.

“Taking care of our existing roads and bridges requires teamwork and innovative solutions to maintain traffic and commerce,” said INDOT Commissioner Brandye Hendrickson. “Having industry compete over closure days prompted the truss-sliding solution that greatly minimized impacts on both sides of the Ohio River.”

Now in its eighth year, the America’s Transportation Awards competition – sponsored by the American Association of State Highway and Transportation Officials, AAA, and the U.S. Chamber of Commerce –  recognizes the best of America’s transportation projects in three main categories: Ahead of Schedule, Under Budget, and Best Use of Innovation.

As a regional winner, the Milton-Madison Bridge Project will also be considered for inclusion in the national “Top Ten.” The 10 projects with highest overall scores will be announced later in August. Finalists will then compete for the Grand Prize and the People’s Choice Awards. The winning state transportation agencies each earn a $10,000 prize to support a non-profit organization. The awards are featured at www.AmericasTransportationAwards.org.