Resilient Cities: Changing the Way We Think About Urban Infrastructure 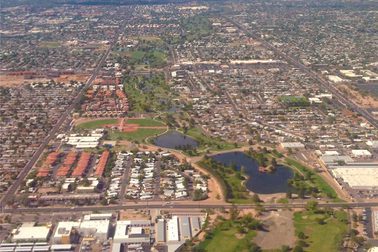 In the early morning of Sept. 8, 2014, rain began to fall across the Phoenix metro area. It showed no signs of stopping during the morning commute, and soon lakes were forming on streets and freeways. Drivers scrambled from their cars as floodwaters overtook their vehicles.

When the skies cleared that afternoon, nearly half of Phoenix’s annual rainfall had been dumped on the city in a matter of hours. Infrastructure built to handle rainwater and runoff – such as retention basins, storm sewers and washes – was overwhelmed. As a result, cars and homes were flooded and two people lost their lives.

The chances of such a rain event occurring in Phoenix during a given year are only 0.2 percent. This is also known as a 500-year flood event because it is expected to be so rare as to occur only once during that period. Just a few weeks after the Sept. 8 rain, another storm soaked the city, a storm that only had a 1 percent chance of occurring (also known as a 100-year flood event).

As extreme weather events like these occur more frequently, global climate change may demand that we recalibrate our definition of “rare.”

In addition to urban flooding, global climate change is predicted to bring increased coastal flooding, like that associated with Hurricane Katrina and Superstorm Sandy, as well as extreme heat.

“The failing in these extreme weather events was that people built and trained themselves to think that events of this magnitude will never happen,” said Charles Redman, founding director and professor in the School of Sustainability at Arizona State University. “It happens now, and we can expect them to happen more frequently in the future!”

Three ASU researchers from different disciplines have joined together to lead a team of 50 researchers from 15 institutions to face these challenges and to change the way we think about urban infrastructure.

“Extreme events present a great challenge to global sustainability, and urban areas are particularly vulnerable to these events, often due to their location, interdependent infrastructure and people concentration,” said Georgia Kosmopoulou, program director in economics at the National Science Foundation.

“This SRN team will develop, through a novel, more holistic approach, methods and tools to assess how infrastructure can become more resilient, providing ecosystem services, in an effort to improve social well-being. They will exploit new technologies promoting flexibility and adaptability in infrastructure that benefit urban populations. The geographical breadth of the proposal is an advantage; cities that represent alternative cultural backgrounds can offer new ideas about socio-ecological-technological infrastructure.”

Despite working in different fields, the ASU researchers leading the UREx SRN each saw a need to improve our current approach to infrastructure.

Project director Redman, an anthropologist, saw that infrastructure does not always serve populations equally. He gives the example of retention basins, used to collect storm water, which are developed into parks in some neighborhoods.

“When you drive around, the retention basins that have soccer fields in them are in the better neighborhoods. Yet it rains the same in other neighborhoods,” he said.

Project co-director Nancy Grimm is an ecologist and professor in the ASU School of Life Sciences. To her, infrastructure that incorporates elements of the natural environment into its design may be more effective in the long run.

“We’re interested in letting a little bit more of nature back into the city,” Grimm said. “We can actually benefit quite a lot from using some of the characteristics of natural systems and incorporating those into our designs.”

She points to coastal wetlands and sand dunes as examples of natural infrastructure protecting urban areas from storms and flooding. Cities should be working with, instead of against, their natural ecosystem setting.

Project co-director Mikhail Chester is an engineer and assistant professor in the ASU School of Sustainable Engineering and the Built Environment. He had a lightbulb moment while driving with Grimm through north Phoenix.

“Nancy said to me, ‘How do engineers use landscape design to minimize indoor heat exposure?’ I thought about it and realized that engineers don’t think about that; landscape architects do. We realized there’s an opportunity to rethink how disciplines can come together to design infrastructure to be more resilient to extreme events,” he said.

Sewage-contaminated storm water that floods the streets and pollutes drinking water sources sounds like a problem of the developing world. But it’s actually happening in 300 cities across the U.S. because of combined sewer overflow systems where rainwater runoff and sewage is collected in the same pipes.

These systems usually deliver sewage to a sewage treatment plant, but during times of heavy rainfall the pipe capacity is exceeded and excess water is discharged without treatment directly to nearby streams and other bodies of water. Sometimes it overflows into the streets. (Phoenix has a divided overflow system and does not face this issue).

“This is not a third-world problem alone,” Redman said. “Nice icons of sustainability, like Portland, which we’re studying, have combined sewer outlets. They do get floods on their streets, and sometimes they are made up of sewage as well as rainfall. It’s an under-the-rug kind of issue that people in charge don’t talk about.”

“We’re here to say that everything is not OK,” Chester said. “We need to find a way to build a new approach to an old problem.”

The team members’ holistic approach to urban infrastructure is novel. They will evaluate the social, ecological and technical systems (SETS) related to infrastructure. This includes recognizing the values of all stakeholders, from city decision makers to the citizens who will use infrastructure; understanding the natural environment; and evaluating available technology. The result will be a suite of tools supporting the assessment and implementation of urban infrastructure that is resilient, safe-to-fail and tailored to a particular city.

“Fail-safe is built on a risk-management principle. It’s all about how often does it happen, how potentially bad is it, who does it affect. Those are the parameters you work with and you work with acceptable levels of those parameters. It leads you to build things that are bigger and heavier,” Redman said.

One example of fail-safe vs. safe-to-fail is the comparison of a greenbelt in Scottsdale and the Los Angeles River channel.

In Scottsdale, the Indian Bend Wash Greenbelt winds through the city in a swath of green and dappled shade. A bike path and green space along the wash improve social well-being for residents in the area. Trees and plants along the wash provide numerous ecosystem services such as creating habitat for animals, maintaining cooler air temperatures and producing oxygen. After it rains, the wash fills with storm water drained from the surrounding roads and neighborhoods. Because the wash is designed to be safe-to-fail, floodwaters do occasionally wash out the bike path and create a river – but repairs are easily made.

Alternatively, the Los Angeles River channel is designed to be fail-safe. Devastating flooding of the LA River in the 1800s resulted in a call for its taming. In the 1930s the river was converted – through feats of engineering and hundreds of hours of manual labor – from natural and meandering to cement and controlled.

While directing the river through a built channel has helped control flooding, it has removed the multifunctionality and ecosystem services that a river typically provides. In addition, the entire system could be paralyzed if one part of the structure sustains significant damage, such as from an earthquake. As a result, the City of Los Angeles has recently begun planning for transforming parts of the river to recapture parts of the lost ecosystem.

Creating safe-to-fail scenarios requires consideration of SETS and the current and future needs of a city. UREx SRN teams co-led by one engineer, one social scientist and one environmental scientist will be based in each partner city. This will ensure that an interdisciplinary approach will be represented across the network and will in turn produce a rich understanding of infrastructure needs and impacts across cities and cultures.

“There is a lot of opportunity to think about who is vulnerable to climate change and where they live in the city; to tailor redevelopment of infrastructure to protect the people who are the most vulnerable,” said Chester, adding that infrastructure design should be appropriate to each location and no single solution applies to all cities.

Teams in Puerto Rico, Mexico and Chile will capture Latin American attitudes in order to understand the cultural value placed on environmental amenities and financial efficiency. Our U.S. cities will look increasingly like Latin American cities, said Redman, who observes that people of Latino ethnicity make up an increasing proportion of the population in U.S. cities.

He adds: “By bringing this all together I think we may be able to really talk to people who build the future. From the first day of designing something like highways and power grids we’re going to talk about how Earth’s systems work and how human institutions react. And we’re going to build for that.

“We’re going to build infrastructure to be more resilient and equitable and not just more efficient.”