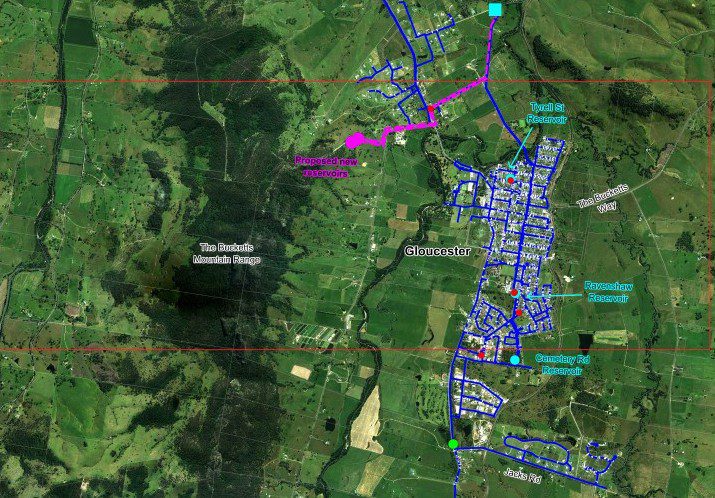 MidCoast Water delivers water and sewerage services to 40,000 households in the Manning, Great Lakes, and Gloucester communities of New South Wales in Australia. It also supplies 8 billion liters of water a year to Karuah in the south, Crowdy Head in the north, and Gloucester in the west.

In 2011, MidCoast Water accepted responsibility for the operation of the aging water and sewer networks in the Gloucester Shire Council area. The Gloucester water distribution network, parts of which date back to 1914, involves three reservoirs and seven booster pumps. Residents experienced water pressure fluctuations as the entire water system relied on booster pumps, which switched on and off based on downstream pressures.

A combination of pump and pipe failures also caused outages. At one point, many residents remained without sufficient water for a couple of days, with 11 main breaks and one leak reported in Gloucester over a 24-hour period.

MidCoast Water sought to find a solution that would increase the residents’ level of water services while reducing the system’s reliance on booster pumps. This would subsequently reduce the ongoing energy use required to operate the system. Using WaterGEMS, MidCoast Water was able to assess over 100 what-if scenarios and to select the optimal solution that would improve the network performance while minimizing energy use.

The Gloucester water network stretches north to south over a very hilly 15 kilometers, with elevations spanning over 60 meters. The highest points in the system are the northern and southern extents, with some additional intermediate high points. None of the three existing reservoirs is at a sufficient elevation to provide adequate pressure to all Gloucester residents. Currently, seven booster pumps are required to provide adequate water pressure. Without the pumps, most residents would have reduced water pressure, and some residents would have no water at all. 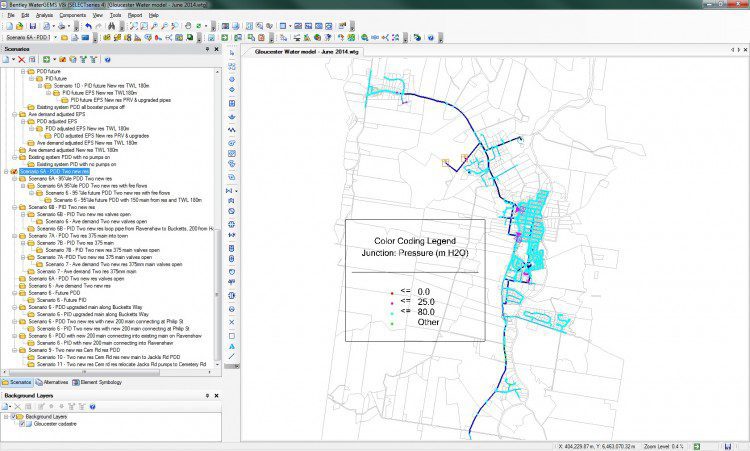 According to the Water Services Association of Australia

(WSAA) Water Supply Code, booster pumps should only be used to boost pressure and should not be the only means of supplying water to the required service levels.

The existing water system also contains nearly 30 kilometers of asbestos cement pipe that was installed between the 1930s and 1980s. The pipe is currently being replaced, but this project will take many years. Because of the poor condition of much of the pipe, pressures within the system must be maintained at relatively low levels (compared to the usual maximum desirable pressure), adding another constraint to the solution design.

MidCoast Water used the asset information contained in its database to develop a hydraulic model using WaterGEMS’ ModelBuilder function. The water network asset information obtained upon handover of the Gloucester Water system to MidCoast Water was patchy, with some missing and incorrect data, including elevations, pipe materials, and diameters. Missing elevations were addressed using WaterGEMS’ TRex feature for terrain elevation extraction, together with half- meter contours obtained by aerial laser survey.

Tracey Hamer, planning engineer at MidCoast Water explained: “This provided a sound basis for developing a working hydraulic model. WaterGEMS, and its powerful database, was used to create, analyze, and compare various scenarios, including future demand and fire-flow scenarios.”

To determine the best solution, MidCoast Water used WaterGEMS to develop over 100 what-if scenarios – assessing various combinations of reservoir heights, pressure reducing valve locations, and water demands. With WaterGEMS, MidCoast Water could compare the energy use of various options, including doing nothing – even though this was not a viable option. WaterGEMS also analyzed various options with large water reservoirs at varying elevations and varying numbers of pressure reducing valves (PRVs) placed within the system. The options with a higher reservoir required more PRVs (due to the number of pressure zones within the system) and so had higher ongoing energy costs and carbon emissions, due to the increased energy required to pump water up to the reservoir. The WaterGEMS Scenario Comparison feature helped MidCoast Water find the right balance between energy use and number of reservoirs.

Using the information from the hydraulic model allowed MidCoast Water to select a sustainable solution based on modeled pressures experienced by the customer, pipe velocities, capital costs, and ongoing operational and maintenance costs, including energy costs.

Selection Process of the Optimal Solution

The options that were assessed require an initial outlay of AUD 7 to 10 million, except for the existing system that would require a smaller outlay to fix existing reservoirs. The solution MidCoast Water chose involves constructing two new reservoirs to replace the three inadequate reservoirs, and constructing new mains to connect the new reservoirs to the water treatment plant and the existing distribution system. This option also includes decommissioning six out of seven booster pump stations, installing one PRV, and upgrading some pipes.

Hamer explained: “The scenario analysis undertaken in WaterGEMS allowed us to identify and test several options that meet the project objectives. A net present value (NPV) analysis was then undertaken to compare all feasible options. This analysis was performed outside of WaterGEMS but utilized information from the hydraulic models such as scenario energy use and pipe diameter and length for cost estimating. Scenario analysis and comparison using WaterGEMS allowed us to find an option with the lowest NPV (at 4 percent) over 50 years.”

Hamer concluded: “This process has allowed us to be confident that we have selected an option that will provide the best ‘bang for our buck’ while delivering adequate levels of service to the customer.”

Once the system improvements are complete, MidCoast Water will see reduced ongoing operational and maintenance (O&M) costs due to the decrease in energy requirements. Annual O&M costs are predicted to decrease by over 75 percent. Over 50 years, system improvements will reduce the NPV of O&M costs by over 80 percent (mainly due to reduced energy costs, but also due to reduced pump maintenance and main breaks). The volume of water storage in the system will also increase, which augments the secure yield of the supply system.

Using WaterGEMS to analyze and compare over 100 scenarios greatly reduced the time for the investigation, option selection, and concept design stage of the project from months to a matter of weeks. In addition, using WaterGEMS enabled MidCoast Water to reduce the cost of delivering the project by significantly reducing the time to complete the concept stage. The cost of the concept works was AUD 15,700, and may have been as high as AUD 95,000 if the options analysis had been done manually.

Perrine Parrod is a senior product marketing manager for Bentley, for the hydraulics and hydrology product line. Perrine holds a Master of Science in Civil Engineering and a Master of Business Administration.  Perrine joined Bentley in 2004 through its acquisition of Haestad Methods, and has ten years of experience marketing Bentley’s products and user projects.