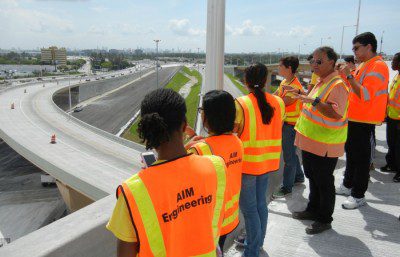 A California bridge that earned an “A” rating just last year from the Federal Highway Administration collapsed last week after heavy rainfall flooded the desert east of the Coachella Valley. Though inspectors had given the bridge a “sufficiency rating” of 91.5 out of 100 and one of the highest flood safety ratings, the 48-year-old bridge crumbled as rain washed away the dirt surrounding its foundation. The unexpected incident highlights the importance of inspiring young people to study fields like civil engineering in college, because they will go on to design the infrastructure of tomorrow.

“It’s important to get kids introduced because it’s our future,” said David Garber, co-director of Accelerated Bridge Construction Center. “Specifically with civil engineering, we have an aging infrastructure, and our resources are decreasing, so it’s an opportunity for innovation in the future.”

Some important aspects of the camp included a field trip to the new Miami Intermodal Center at Miami International Airport, which coordinates transportation in and out of MIA with the local transit systems and the rental car center; a test-drive in the Lehman Center’s Driving Simulation Lab to learn about simulated data collection and analysis; and a construction project where students tested the engineering skills they learned at the camp by designing scale-model balsa-wood bridges, which were tested for stability by driving over them with a remote-controlled toy truck.

Incoming Southwest Miami Senior High School senior Sandi Valdes participated in the FIU Summer Transportation Camp as an alternative to the summer internship required by her finance magnet program. Though her interest has always been in veterinary school, she heard about the free camp from her friends at school and decided to give engineering a try.

“My dad was interested in transportation—highways and roadways, and stuff like that—so I always had an interest in it, but I had never really thought about it as a career,” Valdes said. “I just thought it’d be cool to explore.”

One of her favorite parts of the camp was a field trip to the junction of FL-826 and FL-836 to see how a major road and bridge construction project unfolds. Since the project began in 2009, more than 200 changes have been made to the interchange to divert traffic jams while keeping all lanes open to drivers during construction.

“They took us to the highest point on it, so it was 100 feet in the air, and nobody had driven on it yet, so we could see the whole thing,” Valdes said. “It was fun. It was just something you’d never get to experience anywhere else.”

Her time at the transportation camp introduced her to a new career she hadn’t known much about, and although she still is interested in studying biology or chemistry in college, learning about engineering expanded her realm of possible majors to include biomedical engineering.

“This is actually a really cool job and it’s really interesting,” she said.