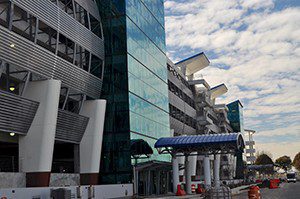 The American Galvanizers Association (AGA) is pleased to announce two new additions to its Galvanized Steel Studies (GSS) initiative. In June, the AGA visited two sites in North Carolina, the Charlotte Douglas Airport Parking Decks and the Metrolina Greenhouses.  Each Galvanized Steel Study is a video featuring interviews with architects, engineers, owners, or others directly involved with a galvanized steel project speaking about how the hot-dip galvanizing has performed over the lifetime of the project.  As of July 2015, six videos have been completed.

The latest additions were filmed in North Carolina where the projects are located in a hot, humid, and corrosive environment. The Charlotte Douglas International Airport Parking Decks project was first galvanized in 2003 and opened for business in 2004. Since the initial deck in 2004, the design team has built four additional parking structures utilizing hot-dip galvanized steel. Brian Bresg of LS3P Associates Ltd. shares why galvanizing was chosen and why they will continue to galvanize future projects.

The newest video added to the series was the Metrolina Greenhouses also in North Carolina. Originally galvanized in 1973, Owner Art Van Wingerden spoke about the harsh environment of a greenhouse and how they needed a coating that would remain rust-free and maintenance-free for generations, while still providing a beautiful and sustainable product.

These new videos join four Galvanized Steel Studies already completed as a part of the 2015 Excellence in Hot-Dip Galvanizing Awards Lifetime Achievement entries.   The first video completed was for the Walter Pyramid at Long Beach State University, which was galvanized in 1994. Cameron Ungar, Associate General Manager and Director of Event Services provided background on the project and detailed why hot-dip galvanizing was chosen as the corrosion protection method for the structure.

Next up were two speedways – Texas Motor Speedway and Daytona International Speedway.  The Texas Motor Speedway in Fort Worth, Texas was galvanized in 1995 and utilizes  hot-dip galvanizing to provide maintenance-free corrosion protection is a very harsh environment.  The Daytona International Speedway in Daytona Beach, Florida was honored with the 2015 Lifetime Achievement Award. In this video, Andrew Booth, Senior Manager of Public Relations discussed the new expansion project and background of the speedway.

The final project in the series to date is the Market Place Center at Faneuil Hall in Boston, Massachusetts. This project utilized a duplex coating and was completed in 1985. Michael Murphy of the Clarendon Group provided background on the structure and spoke about the success of the system and how it has stood the test of time.

In August, the AGA will be adding new GSS from Ohio, where we will film various projects around Columbus, and bridges in Stark County. Watch for these project videos debuting this fall!

All Galvanized Steel Studies are featured throughout the AGA website  and Project Gallery, as well as on all AGA social media platforms. To view the videos, visit the AGA YouTube channel or Facebook page.