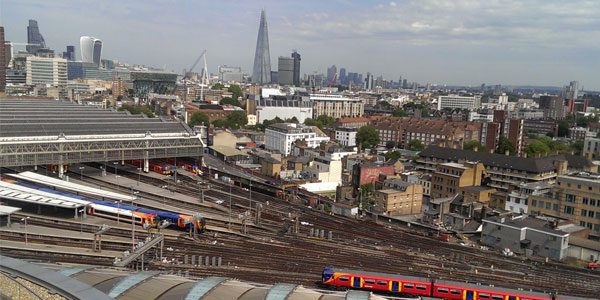 The multi-million pound improvement and expansion of London Waterloo has moved an important step closer this week as a planning application for works to enable more trains to run in and out of the station has been submitted.

London Waterloo is already Britain’s busiest station, with almost 100m passengers a year and a train arriving and departing every minute at the busiest times of day. With numbers forecast to grow by 40% over the next 30 years, Network Rail and South West Trains are working together to bring the platforms in the former Waterloo International Terminal back into use so more trains can run.

These will be the first major changes to Waterloo since the 1930’s, providing five new platforms for London commuter services and completely redesigning the concourse and platforms to be suitable for the hundreds of thousands of passengers passing through every day.

The first part of this project involves strengthening three bridges on the approach to platforms 20-24 as well as changing the layout of the track and platforms. If the planning application is approved, work on the bridges is expected to start in October and is scheduled to be completed by the end of 2016.

A comprehensive public awareness programme is now underway, with letters and leaflets being sent to local homes and businesses to explain the proposals. There is also further information online at www.networkrail.co.uk/wcip as well as contact information to help residents and businesses get in touch and ask further questions.

John Halsall, route infrastructure director for Network Rail, said: “The project to improve the railway and strengthen the bridges on the approach to Waterloo is an absolutely vital part of our plans to improve capacity at Britain’s busiest station.

“The submission of the planning application to carry out this work is an important step forward and, if approved, we expect to start work before the end of the year.”

Tim Shoveller, managing director of South West Trains, added: “We operate one of the busiest railways in Europe, with over half a million passenger journeys every day.

“The biggest investment for decades on our network is well underway but the work to expand London Waterloo is absolutely vital to make sure we can provide much needed extra space, both for our customers now and in the future.”

The planning application for the proposed work has been submitted to the London Borough of Lambeth. If permission is granted preparation work would be expected to start in October 2015, with construction taking place between November 2015 and the end of 2016.  Associated track and signalling work will then continue until mid-2017.

Where possible, work will take place during normal working hours, Monday to Friday (8am-6pm). However, there will be some cases where work will need to take place on Saturday mornings and overnight. This will be clearly communicated to neighbours.

A number of temporary road and footpath closures are likely to be required and if so clear signs will identify alternative routes. If planning consent is granted, the exact locations and times of these temporary closures will be published as part of the detailed design work.

The proposed works are a vital part of the overall programme to increase capacity at London Waterloo and ensure it can continue to provide for the growing number of passengers using the station. Strengthening the bridges will allow platforms 20-24, currently part of the former Waterloo International Terminal, to be used for domestic services.

In addition, plans are also being developed to extend platforms 1-4, to allow 10-car trains to run on the Suburban network for the first time. Meanwhile, more than 250 additional train carriages are being introduced on to the network. Combined, this will provide a 30% increase in capacity across the network, the biggest increase in capacity for decades on one of Britain’s busiest commuter networks.

Network Rail owns, manages and develops Britain’s railway – the 20,000 miles of track, 40,000 bridges and viaducts, and the thousands of signals, level crossings and stations (the largest of which we also run). In partnership with train operators we help people take more than 1.6bn journeys by rail every year – double the number of 1996 – and move hundreds of millions of tonnes of freight, saving almost 8m lorry journeys. We’re investing £38bn in the railway by 2019 to deliver more frequent, more reliable, safer services and brighter and better stations.