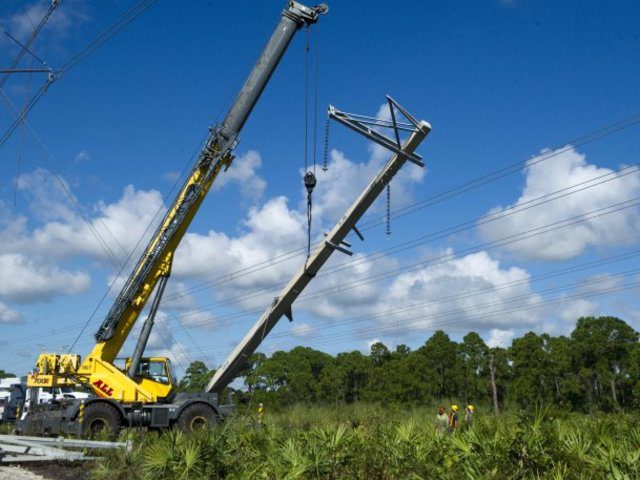 FPL won the coveted industry recognition for initiating a recycling program that repurposed approximately 3,000 tons of concrete for artificial reef building projects over a three-year period starting in 2012 off the coast of St. Lucie County.

“FPL’s generous gift has become a popular fishing and diving site for residents and vacationers alike,” said James Oppenborn, St. Lucie County Marine Resource Coordinator. “These reefs have also created a direct economic opportunity for area businesses to shuttle visitors to and from the reefs’ locations.”

FPL has donated 183 concrete poles and material to a program to help create three artificial reefs.  As a result, approximately 3,000 tons of concrete destined to Florida landfills were diverted. The artificial reefs provide an excellent habitat to more than 110 species of marine life. The abundance and variety of marine species found at these reefs have become an attraction to divers and anglers.

“There were four main considerations to weigh when we embarked on this program.  We had to beneficially reuse poles, reduce waste sent to Florida landfills, limit the amount of required construction management and manage costs,” said Loretta Cranmer, distribution environmental manager, FPL. “This is a perfect way to demonstrate to customers and industry peers that there are sustainable opportunities to leverage when it comes to reducing waste while at the same time making a positive contribution to the local economy.”

As a result of the success of the pole donations from 2012 through 2014, FPL is expanding its donations to artificial reef programs in other coastal counties. FPL now incorporates an environmental “recyclable” assessment process on any project that involves transmission infrastructure. For jobs – in coastal counties – that include removal of more than 30 used concrete poles, the environmental assessment now includes an added scope to bring awareness to the option of donating the poles to local artificial reef programs.

“We also have to look at opportunities that are practical from a construction management perspective, beneficially reuse poles and avoid negative impacts to project costs,” said Cranmer. “Artificial reef programs meet all the criteria.”

Other FPL donations to artificial reef programs include:

Florida Power & Light Company
Florida Power & Light Company is the third-largest electric utility in the United States, serving approximately 4.8 million customer accounts across nearly half of the state of Florida. FPL’s typical 1,000-kWh residential customer bill is approximately 30 percent lower than the latest national average and, in 2014, was the lowest in Florida among reporting utilities for the fifth year in a row. FPL’s service reliability is better than 99.98 percent, and its highly fuel-efficient power plant fleet is one of the cleanest among all utilities nationwide. The company was recognized in 2014 as the most trusted U.S. electric utility by Market Strategies International, and has earned the national ServiceOne Award for outstanding customer service for an unprecedented 10 consecutive years. A leading Florida employer with approximately 8,700 employees, FPL is a subsidiary of Juno Beach, Fla.-based NextEra Energy, Inc. (NYSE: NEE), a clean energy company widely recognized for its efforts in sustainability, ethics and diversity, including being ranked in the top 10 worldwide for innovativeness and community responsibility as part of Fortune’s 2015 list of “World’s Most Admired Companies.” NextEra Energy is also the parent company of NextEra Energy Resources, LLC, which, together with its affiliated entities, is the world’s largest generator of renewable energy from the wind and sun. For more information, visit these websites: www.NextEraEnergy.com, www.FPL.com, www.NextEraEnergyResources.com.