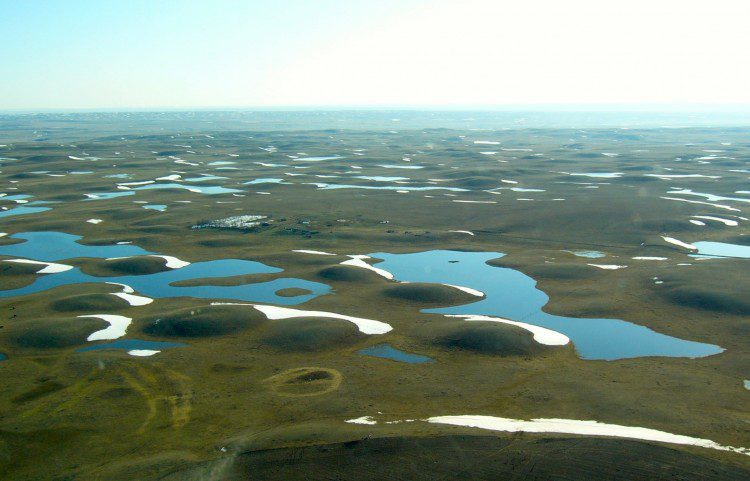 July 15, 2015—The drainage of small wetlands can decrease wildlife habitat and may contribute to flooding in the Prairie Pothole Region (PPR), according to a recent U.S. Geological Survey study.

USGS scientists analyzed data on 141 large PPR wetlands in North Dakota from the 1930s through 2010, and found that they have increased significantly in size. Most of the increases in surface water were due to drainage of smaller wetlands, likely for more efficient agricultural production. This drainage moves surface water into fewer wetlands, making them larger and degrading their abilities to reduce regional flooding and provide productive habitat for animals.

Small wetlands in the PPR are economically and environmentally important because they help recharge local and regional groundwater. They also provide habitat for 50 to 80 percent of North American ducks.

“While the loss of small wetlands has its own effect on the ecosystem, consolidation of their water into larger wetlands can fundamentally change valuable ecosystems in the PPR,” said Michael Anteau, a USGS scientist and an author of the paper. “Our findings are relevant to policy makers and managers making wetland conservation decisions.”

The study is published in the journal Ecosphere.

The scientists used historical aerial photographs to measure and compare the water surface area of wetlands during the study period. They found that current water surface areas were an average of 86 percent greater than they were historically, and that the increase could not be attributed to climate change. Wetlands in highly drained watersheds had nearly three times greater water surface area than those in areas with little drainage.

This work supports the idea that drainage of small wetlands can cause local and regional flooding because as wetlands grow, their likelihood of spillover increases. In contrast, less drained areas with many small wetlands help store water from snowmelt or precipitation, where it evaporates or seeps into the ground.

Other effects include loss of habitat for animals that depend on smaller and dynamic wetlands. These now consolidated wetlands historically dried out during droughts, making stored nutrients available in the sediment. Nutrient surges provide food for aquatic plants and invertebrates after wetlands fill up with water again. Amphibians and waterfowl, including migrating ducks, feed on these plants and invertebrates. Foraging habitat in larger and deeper wetlands is less suitable for these wildlife populations.