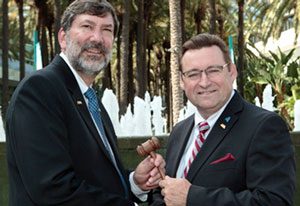 Harrisburg, Pa., July 13, 2015—Gene C. Koontz, PE, BCEE, was elected president of the American Water Works Association (AWWA) board of directors. A nationally renowned water quality professional and senior vice president with Gannett Fleming, Koontz brings more than 40 years of experience to this leadership position. He began his one-year term in June 2015 at the conclusion of AWWA’s Annual Conference and Exposition in Anaheim, California.

As president, Koontz will build on several new AWWA initiatives, including the establishment of an office in India, the launch of the Community Engineering Corps, the introduction of the Water Equation Campaign, and the expansion of AWWA’s Total Water Solutions® offerings.

“I’m thrilled to begin this journey with AWWA and to continue the organization’s work on the many strategic efforts that are underway,” said Koontz. “In the year ahead, I’ll also concentrate on engaging students and young professionals in AWWA to advance the water profession.”

Established in 1881, AWWA is the largest nonprofit educational association dedicated to managing and treating water. With more than 50,000 members, AWWA provides solutions to improve public health, protect the environment, strengthen the economy, and enhance quality of life.

An AWWA member since 1982, Koontz has been an active volunteer and leader in the Pennsylvania Section of AWWA, serving as section chair, Water Quality Committee chair, Water Utility Council member, and Program Committee chair. Prior to his presidency with AWWA, he completed a three-year term on the association’s board of directors, where he also served on the Executive and Finance Committees. Koontz was the recipient of AWWA’s George Warren Fuller Award and Pennsylvania AWWA’s Samuel S. Baxter Award for outstanding service in the field of water supply.

Based in the firm’s headquarters in Harrisburg, Pennsylvania, Koontz serves Gannett Fleming as the firm’s national water market leader. He is a registered professional engineer in 14 states and Puerto Rico and holds a bachelor of science in civil engineering from Lehigh University.