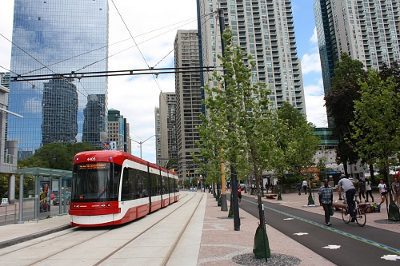 TORONTO, July 13, 2015—Arup, a multidisciplinary engineering and consulting firm with a reputation for delivering innovative and sustainable designs, is proud to have played a significant role in the recently-completed Queens Quay Revitalization project in Toronto, Ontario. Working with DTAH and West 8, Arup was a key collaborator from inception through to project completion. Arup provided multi-disciplinary infrastructure engineering services from the design competition through the feasibility study, environmental assessment, schematic design, detailed design and through to engineering support during construction. The project was delivered by Waterfront Toronto and officially opened to the public in June 2015.

This is the first time in Toronto’s history that the city has drastically changed the focus of the corridor from one heavily reliant on vehicular transportation to one focused on pedestrian mobility, cycling and light rail transit (LRT). It is a cultural shift that has been embraced by the businesses and residents of Toronto, and stretches from Spadina Avenue to Bay Street.

Developed after an international design competition, Arup was engaged to provide transportation planning and civil engineering advice and subsequently led the environmental assessment (approved in 2009). Focused on becoming a welcoming boulevard on the waterfront, the new corridor features east and westbound traffic on the north side of the street with a LRT right-of-way through the middle, and a linear park on the south side featuring a tree-lined public promenade and recreation trail.

“This has been an intensive nine-year project and Arup has been a creative partner in creating this new street typology,” said Waterfront Toronto President John Campbell. “We appreciate their willingness to work with designers on unconventional projects to make them workable without sacrificing the design vision. They played a key role in the design and permitting process that enabled us to move our project forward.”

As lead engineer, Arup was responsible for the design of the road and track alignment, special track work, drainage, civil and municipal services, platforms, structural, and transit priority signal timing, as well as the utilities coordination, transportation planning, traffic engineering, transit planning and engineering, and traffic modeling. In addition, Arup coordinated with the Toronto Transit Commission (TTC) to ensure the systems integrated seamlessly into the civil, road, track and structural design; and also coordinated the permits and approvals associated with the Ministry of the Environment, the City of Toronto, the TTC, and municipal utilities.

“Arup is accustomed to delivering challenging, urban infrastructure engineering projects with cultural, economic and technical considerations,” said Nikos Chalaris, P. Eng., PMP, Associate Principal with Arup. “We are proud that the result of this revitalization project makes the waterfront more accessible to the people and businesses of a more modern Toronto.”

Now in its 15th year in Canada, Arup is also currently involved with the design delivery of several major complex infrastructure projects reaching critical milestones this quarter, including design for two stadia and the velodrome for the 2015 Pan Am Games in Toronto; the Billy Bishop Toronto City Airport pedestrian tunnel; the Bergeron Centre for Engineering Excellence at York University; and the New Champlain Bridge, a PPP bridge replacement project over the St. Lawrence River in Montreal.

Arup is the creative force at the heart of many of the world’s most prominent projects in the built environment and across industry. Its engineers and consultants deliver innovative projects across the world. Arup opened its first North American office 25 years ago and its first Canadian office in 1999, and now employs 1,000 in the Americas. The firm was founded in 1946 with an enduring set of values that fosters a distinctive culture, intellectual independence and collaborative approach. The people at Arup are driven to find a better way to deliver better solutions for their clients. (www.arup.com)