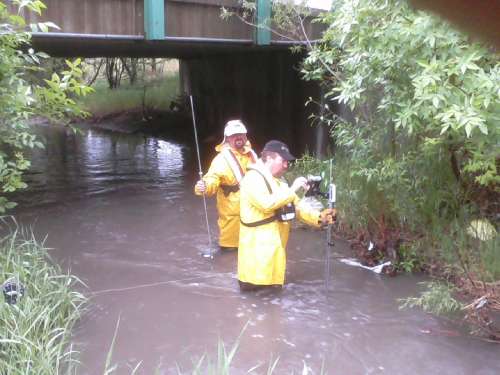 Measurements collected by the USGS during 2013-2014 showed that concentrations of total suspended solids, metals, nutrients and bacteria decreased in runoff to Rapid Creek when stormwater was routed through wetland channels in downtown Rapid City. However, chloride concentrations increased, likely due to the movement of salts deposited during prior runoff events.

“Water quality is important because the portion of Rapid Creek that flows through Rapid City is a valuable spawning area for trout, is used for recreation and is a seasonal municipal water supply for the city,” said Galen Hoogestraat, a USGS hydrologist and the author of the report. “Controlling sediment from construction sites and urban land use is critical for maintaining healthy water quality in the creek.”

“The largest reductions of total suspended solids and lead measured between wetland inlets and outlets were greater than 40 percent,” said Hoogestraat. “This significant percentage highlights the overall success of using wetland channels to improve water quality in Rapid City.”

A total of 357 water-quality samples were collected during 2008-2012 at monitoring sites within the Arrowhead and Meade-Hawthorne drainage basins. Results indicated substantial sediment and bacteria transport from these basins into Rapid Creek.

Water-quality effects differed between open vegetated channels in the Arrowhead drainage basin and concrete channels and conduits in the Meade-Hawthorne drainage basin.

“Concentrations of total suspended solids and bacteria typically were about two times greater at the Meade-Hawthorne outlet compared to the Arrowhead outlet,” said Hoogestraat. “The presence of more vegetated channels in the Arrowhead drainage basin allows for natural treatment of stormwater.”

Stormwater runoff from urban lands harms surface water resources by increasing stream velocities, destroying natural habitat and increasing pollution in receiving waters. As runoff flows over the land or impervious surfaces such as roads and parking lots, it picks up debris, chemicals, sediment and other pollutants that could adversely affect water quality if discharge is not treated.

The USGS report was prepared in cooperation with the City of Rapid City. More information about groundwater in South Dakota is available on the USGS South Dakota Water Science Center website.