/ Projects / Analyzing the City as Superorganism

Analyzing the City as Superorganism 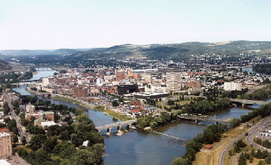 The Binghamton Neighborhood Project (BNP) started with the EvoS program that David Sloan Wilson built on the Binghamton University campus to impart evolutionary thinking to students and scholars from all departments on campus. After an EvoS-induced epiphany, the technology was applied to the city to be studied as a superorganism of social individuals, using participatory research methods that could also improve the lives of the citizens. Using simple  tools to measure human behavior, the BNP is building a GIS (Geographical Information System) database of information about its citizens and mapping the data to understand and transform the way the city might work as a superorganism.

The project started off attempting to map civic virtue, i.e., altruistic or prosocial (as opposed to antisocial) behavior, across the city of Binghamton, using some very simple tools borrowed from other disciplines.

The ambition is to create a “nervous system” that integrates information from all sectors of the city (“health, social services, environment, crime, school”) to monitor and improve quality of life. The Evolution Institute grew out of the early success of the BNP to take on problems far bigger in scope, using the evolutionary framework to address policy issues (in education, economics, etc.) on national and global scales.

Comments are disabled
NEXT ARTICLE
Rebuilding the City as a Platform
August 18, 2012
PREVIOUS ARTICLE
Keys to a Smarter City Address the Innovation Boundary
August 16, 2012