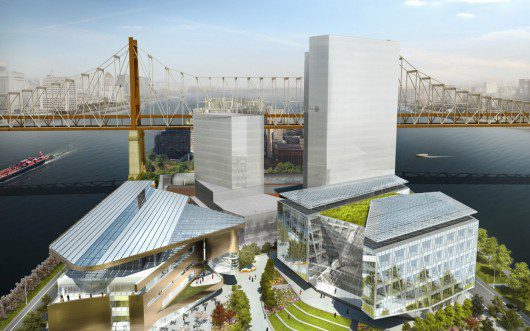 NEW YORK, July 8, 2015—Arup, a multidisciplinary engineering and consulting firm with a reputation for delivering innovative and sustainable designs, recently celebrated the commencement of construction of the 150,000 SF Bloomberg Center, the first academic building on the Cornell Tech campus, designed to achieve net zero energy and LEED Platinum certification. The ceremony on June 16, 2015 was attended by the present and past mayors of New York City, representatives from New York State, Cornell University and its development partners including Morphosis Architects, Arup, and site master plan architects Skidmore Owings and Merrill. It was held at the Franklin D. Roosevelt Four Freedoms Park, south of the future Cornell Tech Roosevelt Island campus.

Arup’s integrated design approach aimed to create an exemplary green building. Sustainability goals included meeting the functional requirements of an advanced academic facility, while creating a building that is low carbon, energy-efficient, healthy and pleasant to be in, and designed in accordance with the LEED New Construction 2009 rating system. Design elements include roof-mounted photovoltaic (PV) systems that are part of a campus-wide array of solar panels dedicated to the Bloomberg Center, and ground source heat pumps that harness the constant temperature of the earth to both warm and cool the building. The building – located on an island in the East River – is also designed to be resilient to potential flood conditions over its design life.

“Cornell University has a longstanding commitment to sustainability, and that includes Cornell Tech’s developing campus on Roosevelt Island, which will be among the most energy efficient campuses in the world,” said Diana Allegretti, assistant director for design & construction at Cornell Tech. “Through strong communication and a strongly collaborative relationship, Cornell, Arup and Morphosis were able to push the boundaries of what can be achieved towards net zero energy on a campus building of this scale.”

The building includes a variety of study, social, conference, office, atrium and lecture spaces with a large ground floor café. The design emphasizes the creation of open spaces, collaboration spaces and connectivity to foster advanced research and technological innovation. It anticipates flexibility in use as the program adapts to future needs. Through close collaboration with Cornell Tech and Morphosis, Arup led the project team in designing one of the smartest buildings in the world. “The goal is to transform the human experience through integrating together all of the building systems and user applications. The building itself will respond to people’s presence as well as become an important teaching tool as Cornell Tech develops and incubates new technologies and businesses,” shares David Wilts, Arup’s smart building leader.

The PV system on the Bloomberg Center building is supported on an elevated steel canopy,  which is designed to combine simplicity with elegance and create a strong unifying feature.

An example of both the integration of the project goals and collaboration between Morphosis and Arup is found in the design of the facade, which integrates energy performance and building form with the strategy for controlled daylighting of interior spaces and the optimization of prime views towards Manhattan and across the campus.  A primary element of the east (campus facing) side of the building is a glass-clad stair – supported on an exposed steel diagrid perimeter frame that in turn supports the PV canopy – to create a sculpted anchor point within the campus.

“Cornell has pushed very hard for energy and sustainability goals throughout the project in a way that has helped us realize remarkable energy use reductions,” said Fiona Cousins PE, CEng, LEED Fellow. “The Cornell facilities team has been strongly engaged throughout the design process, occasionally using Cornell students to investigate different design outcomes. It was refreshing to work with such a forward thinking client, and the planned goals could make this the largest net zero energy building east of the Mississippi River.”

About Arup
Arup is the creative force at the heart of many of the world’s most prominent projects in the built environment and across industry. Its engineers and consultants deliver innovative projects across the world. Arup opened its first US office 25 years ago, and now employs 1,000 in the Americas. The firm was founded in 1946 with an enduring set of values that fosters a distinctive culture, intellectual independence and collaborative approach. The people at Arup are driven to find a better way to deliver better solutions for their clients. ( www.arup.com )