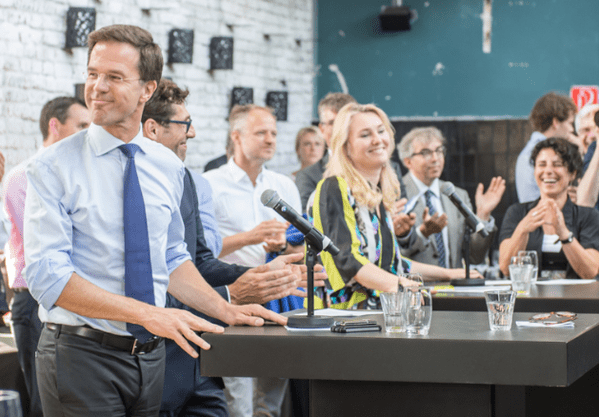 The prime minister Mark Rutte, minister of Infrastructure and the Environment Melanie Schultz, and alderman Boudewijn Revis of BSKB The Hague experimented in a real life digital urban planning system yesterday at Binckhorst. This experiment marks the collaboration with political The Hague that has proclaimed Tygron personally as the urban planning tool of the future. It was clear that the Tygron Engine led to a shared consensus between all parties.

Good initiatives created by civilians and business owners are not always easy to implement because of the 26 separate laws that will stay in place till 2018. Tygron’s values go hand in hand with the aims of the contemporary environmental law that will merge these laws into one simpler, cheaper, and faster mandate. With it, more people are able to make changes to their surroundings, vote on ideas, understand, and be a part of their environment.

July 1st the new law has been accepted with a large majority in the House of Representatives, and this was celebrated with a day full of activities with the new law as their theme. We already knew Tygron would be able to contribute to this, but we are extra proud to announce that political The Hague has now met Tygron personally as urban planning tool.

The Binckhorst is one of the areas ripe for development with the new environment law. Commerce, residence and industry together in one area. How do you approach this? It was hard to imagine a better answer to this question. At a new cafe in the center of the Binckhorst, right next to the Tygron offices, several ministers participated in a session facilitated by Tygron. A fantastic start with great potential for the future.

The prime minister Mark Rutte, minister of Infrastructure and the Environment Melanie Schultz, and alderman Boudewijn Revis of BSKB The Hague arrived at the Caballero Factory by boat. They were received by hosts of Mama Kelly, and after a brief tour were ready for a roleplaying game centered around the environment law.

In this session the role of initiator was played by prime minister Rutte. Minister Schultz represented the residents of the area and alderman Revis participated as the municipality. These three parties each had their own screen on which the various parties could see developments and plans visualized from their own perspectives. In a short session a part of the area was filled in, and a consensus was found about the area’s function. It was clear that the Tygron Engine led to a shared consensus between all parties.

After a delicious lunch all who were present took part in a “crash test” discussion forum. This session was established as a prelude to putting the environment law to practice. The afternoon was started with talks about the content of the new law, courtesy of Maarten Engelberts and Selma van Velsen of the Ministry of Infrastructure and the Environment. Participants then initiated discussions about the various scenario’s visualized in the Tygron Engine. In this session, greater depth was possible, and everyone could provide input for applying the new law, based on their own expertise.

4 roles were represented in the example case. These were the housing corporation, the municipality, the residents, and the project developer. In groups of 10 participants each, sides were chosen, representing the various views on the provided case. After these groups discussed the issues internally, they all came together again, and a discussion was started on how to reach a consensus. This immediately provided insight into the key aspects of the case. It was great to see that these aspects where exactly those that the ministry intends to focus on. Especially the why (why should this be permitted) and the how (how can this be made a reality) questions required further thought. The results of this session will serve as input for a report that is being composed, about applying the new environment law. In this way, the participants of this session have directly contributed to the implementation of the new law.

Very recognizable for everyone who already works with the Tygron Engine: finding and considering the interests of all stakeholders, and directly receive feedback on different options. We are looking forward to deploying the Tygron Engine in the future as well, as a tool for implementing the new environment law.

Soon there will also be a video of this memorable day. We will inform you as soon as it’s available. You will be able to see the positive effect the Tygron Engine has had on all who were present. It’s also a very strong example of how this tool can be applied.