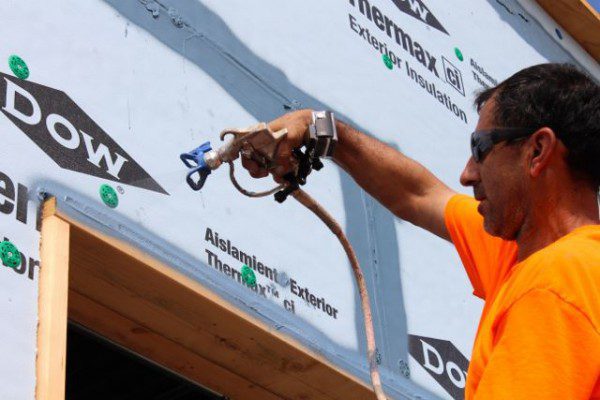 July 1, 2015—Drafty buildings are a thermostat’s worst enemy. Leaks around windows and a multitude of other breaches in the building envelope can cause heat and air-conditioning systems to run excessively, hogging energy as it continually warms — or cools and dehumidifies — the invading outside air.

The energy loss from air leakage in buildings is estimated to be about 4 quads (4 quadrillion BTUs) or about 4 percent of the total energy used in the United States annually, according to the Department of Energy’s Energy Data Book.

Building technology researchers at DOE’s Oak Ridge National Laboratory collaborated with Dow to evaluate a new product invented by Dow that significantly reduces air leakage and helps to make residential and commercial buildings more energy efficient. Branded as LIQUIDARMORTM – CM Flashing and Sealant, the sealant was patented and introduced to the US market in 2014. It is a one-step liquid flashing that can be brushed or sprayed on surfaces to seal gaps, cracks, and seams in the building envelope, and is especially effective on rough openings where windows and doors are installed. The fluid nature of the product allows it to “fill” as well as “bridge” gaps, providing additional robustness of seal.

“Reducing air leakage in residential and commercial buildings is among the most cost-effective means to lower energy consumption,” said Diana Hun, building technologies researcher at ORNL. “We have the ability to evaluate air barrier assemblies to determine whether sealants like LIQUIDARMOR can stand up to the elements and improve energy efficiency.”

The elastomeric — or rubbery — liquid adheres well to most substrates, even as buildings settle or adjust to wind pressures and changes in temperature. Additionally, its water-based acrylic formula significantly decreases workers’ exposure to volatile organic compounds (VOCs) and reduces VOC emissions into the atmosphere.

“One of the main advantages a liquid sealant such as LIQUIDARMOR has over tape is that it can be faster to install,” Hun said. “Because it can be sprayed on, installation can be as much as three to four times faster than tape. Also, the spraying process can be more forgiving and foolproof, and a high-quality seal can be more reliably achieved, especially in areas with complex shapes.”

Hun and her research team evaluated the sealant’s effectiveness by using ORNL’s unique Heat, Air, and Moisture (HAM) Penetration chamber that measures the impact that various environmental conditions have on wall assemblies treated with LIQUIDARMOR. The HAM chamber — the only apparatus of its kind — simulates indoor temperatures of 60°F to 90°F and outdoor temperatures of 0°F to 110°F. Additionally, the chambers can subject walls to 10 to 90 percent relative humidity and other outdoor conditions such as rain, solar radiation, and pressures from wind and wind gusts that range from -30 to 30 pounds per square foot.

Hun and her team installed LIQUIDARMOR on a wall assembly to seal the gaps between THERMAX™ Brand rigid insulation boards and exterior drywall, and those around window openings. The evaluation process per wall lasted about five days. Based on ORNL’s findings, Dow was able to subject LIQUIDARMOR to a more rigorous evaluation that included aging due to pressure and temperature cycles; thus validating the performance of the LIQUIDARMOR seal under stress.

The US Department of Energy’s Building Technologies Office sponsored the ORNL-Dow collaboration through the US–China Clean Energy Research Center for Building Energy Efficiency, which supports the development of advanced technologies to reduce energy consumption and CO2 emissions in the United States and China. Widespread opportunities for use of LIQUIDARMOR exist in China because construction practices there include minimal building envelope air sealing.

In 2015, research continues on testing LIQUIDARMOR for more ways to demonstrate durability and increase energy savings in the building envelope, further contributing to DOE’s mission to reduce energy use in buildings.—By Marlene Taylor