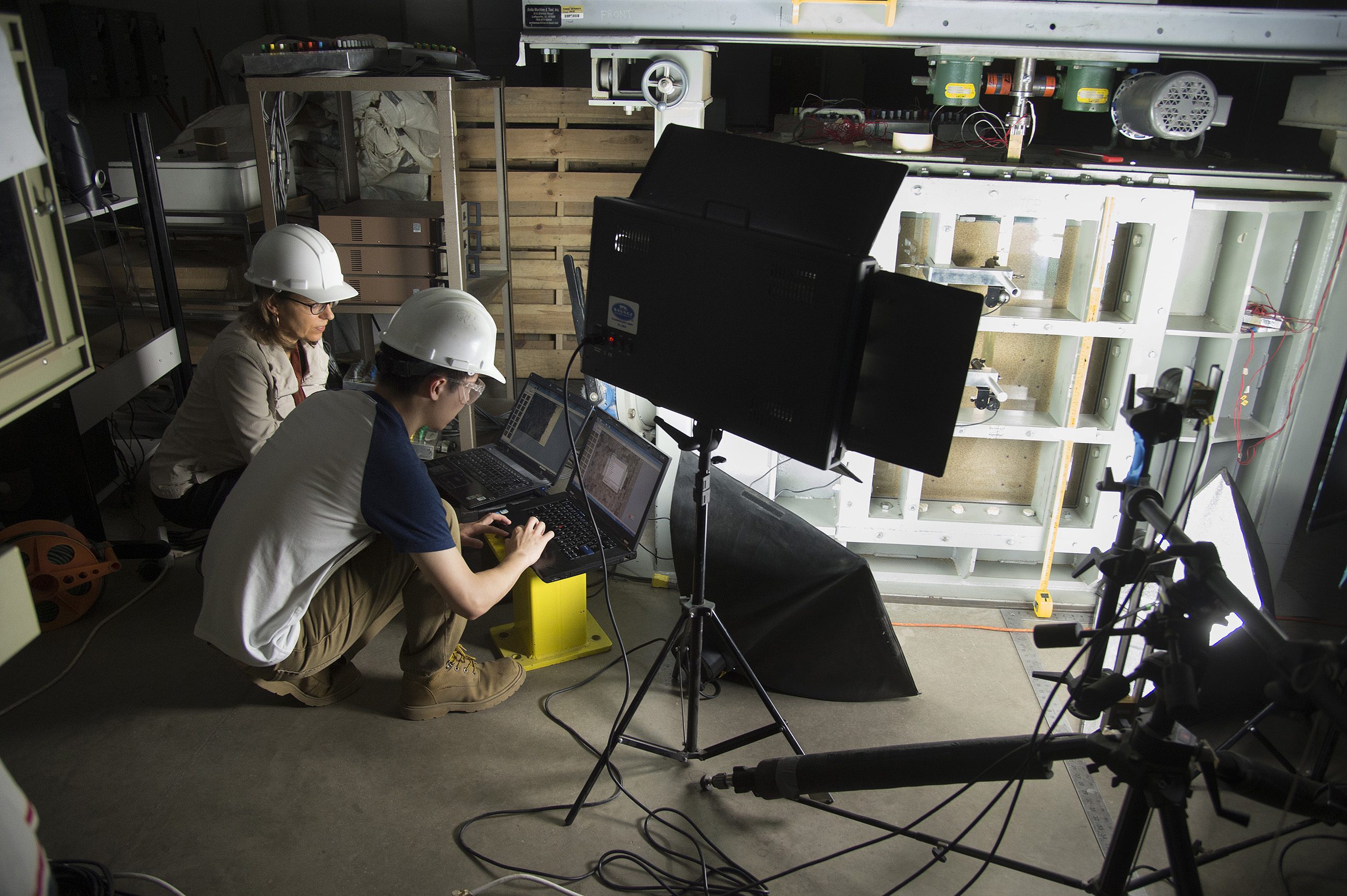 WEST LAFAYETTE, Ind., July 1, 2015—A test chamber developed at Purdue University allows engineers to simulate precisely what happens to soil underground during the installation of piles and other structural elements, a research tool for improving construction of everything from buildings and bridges to offshore wind turbines.

The system can be used to study many types of geotechnical structures during both their construction and service life, said Rodrigo Salgado, a professor of civil engineering. Geotechnical research involves aspects of geological science, mechanics and civil and structural engineering.

“The nice thing about the chamber is that it can be used to study many geotechnical problems for which there are neither experimental data nor theoretical solutions,” he said.

The researchers have demonstrated the system with cone penetration testing, which can reach depths in excess of 100 feet and is often used to estimate the properties of soil before installing structures both offshore and on land.

“You need to know how strong the soil is to determine how much load you can put on it or whether you need to do something to improve it before building on it,” said Monica Prezzi, a professor of civil engineering.

The system consists of a half-circle-shaped chamber 1.2 meters tall and 1.6 meters wide with a transparent window in the side. A series of images is taken with cameras and a digital microscope as the cone penetrometer probe is pushed into the sand. The sand contains colored particles that allow researchers to track the movement of soil particles with a technique called digital image correlation (DIC). The researchers also developed a mechanism that precisely controls the density of the soil by uniformly “raining” the sand into the chamber through holes in a disc-shaped “pluviator.”

A paper about the new chamber was awarded a Geotechnical Research Medal from the Institution of Civil Engineers in the UK, meaning it was the best paper of the year in ICE journals with geotechnical content. The paper was published in July 2014 in the journal Geotechnique, and the award will be issued during a ceremony in October. The paper was authored by former doctoral students Mazhar Arshad and Faraz Tehrani, who have graduated, Prezzi and Salgado.

One limitation of current methods of interpreting cone penetration is that there is “no rigorous theoretical solution of the penetration problem,” Salgado said. The problem is complicated by the fact that soil sometimes behaves as a solid – when stresses are below certain limits – and sometimes as a fluid, when those limits are exceeded, Salgado said.

“It will behave as a solid up to a point and then it will start flowing more like a fluid,” he said. “It is very difficult to analyze a problem like this where you are pushing something into the ground because you have this flow aspect to it, but then you may have soil just around it that is still like a solid.”

Experiments using the chamber will provide data for development of models and also to validate new models. Images were shown to precisely track the displacement of soil in the cone penetration experiments.

“The DIC method allows you to model it from an experimental viewpoint because you can actually see what’s happening so you can track particle groupings in images, calculate deformations, how much flow has happened, and so on,” Salgado said.

It took about five years to design and build the chamber, which was challenging because elements of the system must remain perfectly aligned while objects are forced at high pressure into the soil sample. Another challenge was integrating the transparent window, which is made of 3-inch-thick Plexiglas.

“This was all done from scratch, so we had to spend a lot of time on the details,” Prezzi said.

“Until now, nobody has been able to measure the displacement and deformation field around the cone,” Salgado said. “So this is the first time we can actually visualize that.”

Such research could lead to improved structures.

“You can make the case that if you know things with a lot more accuracy and precision and you understand them on a fundamental level you will prevent failures, and you also do things more economically,” Salgado said.

“The challenges posed by carbonate sands, due to their crushability and resulting different mechanical response, are well illustrated by the case of Woodside’s North Ranking A platform in Western Australia,” she said. “Overestimation of pile capacity from designing in carbonate sand using methods developed for silica sand was a costly lesson, with $340 million in 1988 Australian dollars spent on remedial work.”

Accurate testing data might have prevented the failure and avoided expensive repairs, she said.

The new chamber has attracted researchers and civil engineering students from around the world. Six undergraduate students and five doctoral students are working in experimental programs that use the chamber.

The chamber is the first such large-scale system for geotechnical research, enabling the study of problems with axial symmetry, “or symmetry with respect to plane” that would not otherwise be possible, she said. It is housed in Purdue’s Robert L. and Terry L. Bowen Laboratory for Large-Scale Civil Engineering Research and has been used to study problems of interest to the Center for Offshore, Foundation and Energy Engineering (COFFEE) at Purdue.

The research has been funded in part by the National Science Foundation. (Grant no. 0969949)

Richard Fragaszy, NSF program director, Geotechnical Engineering and Materials in the Civil, Mechanical, and Manufacturing Innovation Division, said, “Understanding the mechanisms involved in penetration of the ground is essential for the safe and economical design of foundation systems. I am excited by the new research opportunities this equipment makes possible.”