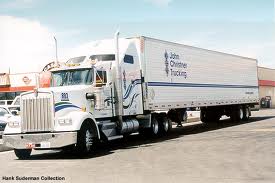 Implemented over the long term beginning in model year 2021 and culminating in standards for model year 2027, the proposed Phase 2 standards include separate engine standards that EPA said will promote continued progress on engine efficiency and allow for direct measurement of engine emissions. The proposals also allow banking and trading of emissions credits for most manufacturers, which the agencies said provides the opportunity for businesses to choose the most cost-effective path to meeting the standards.

The agencies are also proposing efficiency and GHG standards for trailers for the first time. The EPA trailer standards, which exclude certain categories such as mobile homes, would begin to take effect in model year 2018 for certain trailers, while NHTSA’s standards would be in effect as of 2021, with credits available for voluntary participation before then.

The proposed standards are expected to lower CO2 emissions by approximately 1 billion metric tons, cut fuel costs by about $170 billion, and reduce oil consumption by up to 1.8 billion barrels over the lifetime of the vehicles sold under the program.

“Once upon a time, to be pro-environment you had to be anti-big-vehicles,” said U.S Transportation Secretary Anthony Foxx. “This rule will change that.

“In fact, these efficiency standards are good for the environment – and the economy. When trucks use less fuel, shipping costs go down. It’s good news all around, especially for anyone with an online shopping habit.”

The agencies said that the proposed standards are cost effective for consumers and businesses, delivering favorable payback periods for truck owners. The buyer of a new long-haul truck in 2027 would recoup the investment in fuel-efficient technology in less than two years through fuel savings, the agencies said.

The product of three years of extensive testing and research, the proposed vehicle and engine performance standards would cover model years 2021 through 2027 and apply to Class 5 through Class 8 trucks, large pickup trucks and vans, as well as types and sizes of buses and work trucks. They would achieve up to 24% lower CO2 emissions and fuel consumption than an equivalent tractor in 2018, based on the fully phased-in standards for the tractor alone in a tractor-trailer vehicle.

The standards do not mandate the use of specific technologies. Rather, the agencies said, they establish standards achievable through a range of technology options and allow manufacturers to choose those technologies that work best for their products and for their customers. The technologies include improved transmissions, engine combustion optimization, aerodynamic improvements and low rolling resistance tires.

The proposed standards are fully harmonized between NHTSA and EPA and the agencies worked closely with the California’s Air Resources Board (CARB) in developing the proposed rules.

A public comment period will be open for 60 days after the proposal is published in the Federal Register. In addition, NHTSA and EPA will host two public hearings and continue its policy of meeting with stakeholders over the course of the comment period.

The proposals drew both praise and scorn from different segments of the industry. Dave Crompton, vice president and president, Engine Business at Cummins said that his company “welcomes the proposal with its goals to improve fuel efficiency and reduce GHG emissions, creating a win-win for both customers and the environment. We are pleased that the new proposal builds upon the Phase 1 framework that aligns technological advances and industry success.”

On the flip side, the National Automobile Dealers Association (NADA) and American Truck Dealers (ATD) issued a statement blasting the proposals, saying that “adding potentially $14,000 to the cost of a new truck through mandates based on potentially untested technologies is a great risk to a still-fragile economy.

“Recent history has shown that mandates with underestimated compliance costs result in substantially higher prices for commercial vehicles and force fleet owners and operators to seek out less-expensive and less fuel-efficient alternatives in the marketplace. The costs could even drive small fleets and owner-operators out of business, costing jobs and only further impeding economic growth.”