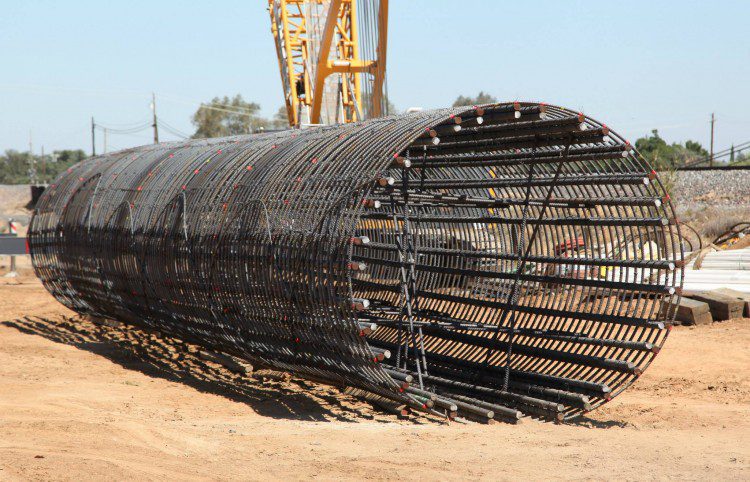 MADERA, Calif., June 17, 2015—Travelers on Amtrak and State Route 145 in Madera County can see the beginnings of the Fresno River Viaduct, the first aerial structure to be built as part of California’s high-speed rail program. This viaduct will stretch from Raymond Road to Watson Street, crossing State Route 145, the Fresno River, and will run parallel with the Burlington Northern Santa Fe railway track.

“Continued progress on the high-speed rail program is evident by the work being done today at the Fresno River Bridge,” said High-Speed Rail Authority CEO Jeff Morales. “Californians will continue to see more jobs and sustainable construction activity as we ramp up building high-speed rail in the Central Valley.”

Tutor Perini/Zachry/Parsons, a Joint Venture (TPZP), is the design-build team in charge of delivering Construction Package 1 (CP 1), the first 29 mile stretch between Avenue 17 in Madera County to East American Avenue in Fresno County. This week, workers began the process of constructing the foundation for the viaduct and will gradually complete the 1,600 foot structure by segments. They started by assembling the rebar cages and digging the holes for the production piles, which serves as the foundation for the bridge columns.

After the cages are inserted into the ground, concrete is placed and left to cure for approximately three days. The piles in the river bottom will be different from the ones on higher ground as they will be shorter, in pairs and have a reinforced concrete pile cap in place before the column is erected above ground. The foundation will ensure that the high-speed trains are adequately supported while traveling at speeds exceeding 200 mph.

The California High-Speed Rail Authority (Authority) is responsible for planning, designing, building and operation of the first high-speed rail system in the nation. California high-speed rail will connect the mega-regions of the state, contribute to economic development and a cleaner environment, create jobs and preserve agricultural and protected lands. By 2029, the system will run from San Francisco to the Los Angeles basin in under three hours at speeds capable of over 200 miles per hour. The system will eventually extend to Sacramento and San Diego, totaling 800 miles with up to 24 stations. In addition, the Authority is working with regional partners to implement a statewide rail modernization plan that will invest billions of dollars in local and regional rail lines to meet the state’s 21st century transportation needs. To learn more visit the Authority’s website at http://www.hsr.ca.gov