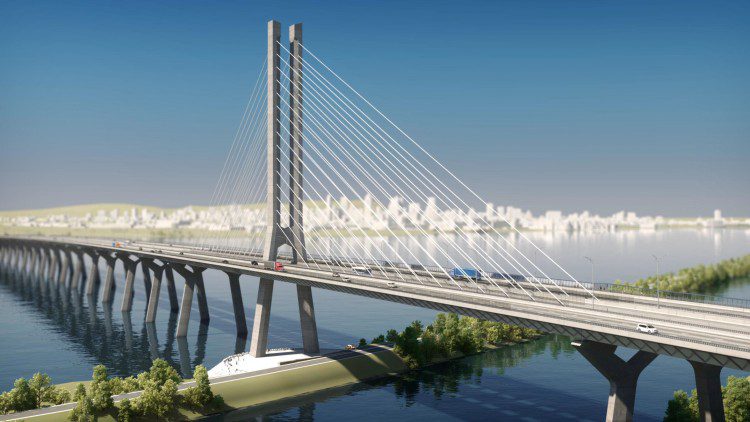 Montréal, Quebec, June 19, 2015—The Honourable Denis Lebel, Minister of Infrastructure, Communities and Intergovernmental Affairs, and Minister of the Economic Development Agency of Canada for the Regions of Quebec, today presided over the historic launch of one of the largest construction sites in North America. The project will create 30,000 high quality jobs in the Montreal region and across Canada, and ensure the economic growth and prosperity of the Greater Montreal region for generations.

The total cost of the project is $4.239 billion, well within the Government of Canada’s initial estimates. This amount includes the $3.977 billion contract between the Government of Canada and the Signature on the St. Lawrence Group, which covers the construction period, to begin in June 2015 and end in the fall of 2019, as well as a subsequent 30-year operating period. The agreement includes the design, construction, financing, operation and rehabilitation of the corridor project, including the new Champlain Bridge, the new Île-des-Sœurs Bridge and reconstruction and widening of the federal portion of Highway 15.

The ceremony, attended by Quebec Transport Minister Robert Poëti, the mayors of Montreal, Brossard and Longueuil and the mayors of the boroughs of Verdun and Sud-Ouest, took place on Île-des-Sœurs, near the construction site of the new Champlain Bridge.

“I am very pleased to officially announce the long-awaited start of work on the new Champlain Bridge, a project which will give Montreal a world-class infrastructure that will make our citizens proud and ensure economic growth and long-term prosperity for the metropolitan region of Montréal and Canada as a whole.”

“I would also like to mention the outstanding cooperation received by the Government of Canada from the various stakeholders throughout the implementation of this huge project. It is in large part because of their support that we were able to accelerate the timelines.”

– The Honourable Denis Lebel, Minister of Infrastructure, Communities and Intergovernmental Affairs and Minister of the Economic Development Agency of Canada for the Regions of Quebec

“For the Government of Quebec, the new Champlain bridge will ensure a strategic passenger and freight transportation link is sustained that is vital for the Greater Montréal area and for Quebec as a whole. The federal government can rely on the full cooperation of Quebec’s Ministry of Transportation and its partners to help coordinate interventions and minimize the impact of this major work on traffic. This large-scale construction project, which consists of replacing one of the busiest bridges in Canada, will generate significant spin-off benefits in the metropolitan area, including, for one notable example, job creation.”

“In just a few years’ time, we will benefit from a new gateway to our city. The start of work on the replacement of the Champlain Bridge is essential for the economic development of Montréal, the surrounding region, and all of Eastern Canada. We hope that this bridge, which will include rapid public transit, will make Montrealers proud. We will continue to work closely with our government partners to put in place mitigation measures throughout this important construction project to protect our citizens’ quality of life and ensure smooth traffic flow on this vital national transportation corridor.”

– Denis Coderre, Mayor of the City of Montréal

“It’s a big day for the City of Brossard and the entire metropolitan area. The new structure that was presented to us a few months ago is not only spectacular, but better responds to the needs of citizens and those of future light rail users. I want to highlight the exemplary work of MinisterLebel and his team on this complex project.”

“The Champlain Bridge is a major project for our community. It places Verdun at the centre of the economic development axis between downtown, the South Shore and the United States. With this bridge, we will be one of the primary access points in the city and we’re confident that this will have many economic spin-off benefits. Verdun is happy to have collaborated with Infrastructure Canada to realize this mega-project and will continue on this path of partnership with the SSL consortium to ensure work progresses smoothly in our area.”

“We’re very happy that the new Champlain Bridge is moving forward without delay. More importantly still, the design of the new bridge will make room for the infrastructure required to put durable, efficient public transit in place that will significantly contribute to the development of Bridge-Wellington.”

“This new bridge will improve traffic flow for all the workers of the Longueuil community who contribute every day to the vitality of the city’s economy and that of all of Quebec. The arrival of the light rail system as a means of public transit will surely mark a significant milestone for the electrification of public transportation throughout Quebec.”