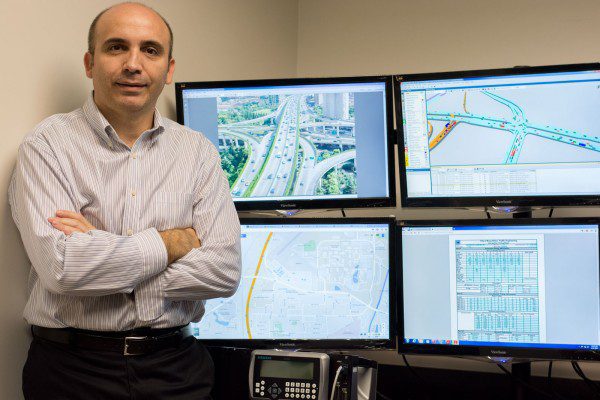 June 22, 2015—Traffic jams not only make daily commutes exasperating, they also contribute to excessive fuel consumption and air pollution. According to the U.S. Department of Transportation, outdated traffic signaling accounts for more than 10 percent of all traffic delays. Adaptive traffic control systems or “smart” traffic lights allow intersection signals to adjust to real-time traffic conditions like accidents, road construction and even weather. In the U.S., adaptive signal control technologies have been in use for approximately 20 years, but have been deployed on less than 3 percent of existing traffic signals. Florida, California and Michigan are among the states paving the way to make traffic signal improvements a priority.

Researchers in the Laboratory for Adaptive Traffic Operations & Management (LATOM) in the College of Engineering and Computer Science at Florida Atlantic University have received a $100,000 grant from the City of Miami Beach to test two adaptive traffic signals being considered for one of their busiest corridors in South Beach – Arthur Godfrey Road (41st Street). Miami is among the 10 U.S. cities with the worst traffic. In addition, FAU’s LATOM recently received a $300,000 grant from the Florida Department of Transportation to research use of high-resolution data, from signal controllers and detectors, to monitor performance of traffic signals.

“Timing for research in adaptive control systems is right and perspectives are exciting,” said Mohammad Ilyas, Ph.D., dean of FAU’s College of Engineering and Computer Science. “With better sensing technologies such as wireless communication and personal mobile devices, smarter algorithms, and more processing power, we are moving towards an era of much more efficient, safer and eco-friendly traffic signals.”

These complex systems require extensive surveillance and communication infrastructure to enable connection either among local controllers or between a central system and the local controllers. FAU’s LATOM is a one-of-kind simulation lab equipped with software, hardware and institutional capabilities, providing regional, national and international partners with opportunities to develop new and use existing methods and tools to monitor, manage and control transportation infrastructure.

“Congested roads have long been a headache for contemporary cities and we need to look at innovative ways to deal with traffic,” said Aleksandar Stevanovic, Ph.D., PE, director of LATOM and associate professor in the Department of Civil, Environmental and Geomatics Engineering in the College of Engineering and Computer Science at FAU. “While better management of traffic signals won’t reduce the number of cars on our streets, we can do a much better job in adjusting signals to work more efficiently.” He adds, “Smart traffic lights are one way to address urban traffic congestion, and if timed properly and continually, they can both reduce traffic delays and improve public safety.”

Conventional signal systems use pre-programmed, daily signal timing schedules. Adaptive traffic control systems on the other hand, adjust the timing of red, yellow and green lights to accommodate changing traffic patterns. Duration of the green lights is usually a result of a complex compromise between the needs of a single intersection and the needs for good connection/progression with other surrounding intersections. Adaptive traffic control systems create such compromising solutions ‘on the fly’ by extensively using wires embedded in city streets, or other forms of detectors, to sense changes in traffic demands and its patterns.

As a relatively new technology, adaptive control systems are still somewhat expensive. Therefore, municipalities often seek advice from experts and research labs to pre-test effectiveness of these systems in the lab environment before the systems are deployed in live traffic.

“In our lab, we are able to work with our partners to model or ‘simulate’ different traffic patterns throughout a day – and on weekends and during various other scenarios – where virtually the same technology that controls traffic in the field is used in simulation to test its effectiveness and reliability,” said Stevanovic.

According to the U.S. Department of Transportation, on average, smart traffic lights improve travel time by more than 10 percent, and in areas with particularly outdated signal timing, improvements can be 50 percent or more.

About FAU’s College of Engineering and Computer Science

Florida Atlantic University, established in 1961, officially opened its doors in 1964 as the fifth public university in Florida. Today, the University, with an annual economic impact of $6.3 billion, serves more than 30,000 undergraduate and graduate students at sites throughout its six-county service region in southeast Florida. FAU’s world-class teaching and research faculty serves students through 10 colleges: the Dorothy F. Schmidt College of Arts and Letters, the College of Business, the College for Design and Social Inquiry, the College of Education, the College of Engineering and Computer Science, the Graduate College, the Harriet L. Wilkes Honors College, the Charles E. Schmidt College of Medicine, the Christine E. Lynn College of Nursing and the Charles E. Schmidt College of Science. FAU is ranked as a High Research Activity institution by the Carnegie Foundation for the Advancement of Teaching. The University is placing special focus on the rapid development of critical areas that form the basis of its strategic plan: Healthy aging, biotech, coastal and marine issues, neuroscience, regenerative medicine, informatics, lifespan and the environment. These areas provide opportunities for faculty and students to build upon FAU’s existing strengths in research and scholarship. For more information, visit www.fau.edu.