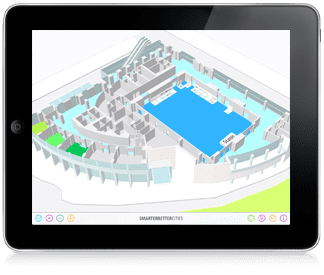 Redlands, Calif., June 16, 2015—SmarterBetterCities today announced that it closed a $1 million seed funding round led by Zürcher Kantonalbank. SmarterBetterCities will use its seed investment to pursue its clear-cut sales strategy for rapidly growing into the US market and to expand its already high-profile customer base, which currently includes the State of Oregon, Harvard University, City of Zurich, AECOM, Sika, Foster+Partners, among others. Further, it will radically extent its technology to serve new market segments, such as real estate and facility planning.

The software company is bringing affordable Smart 3D City solutions to urban planning in every town with its innovative service CloudCities (http://cloudciti.es). Today, small towns and big cities are being challenged by big and little data while coping with growth and scarcity of resources. Conventional planning, management and decision-making processes are usually time-consuming, inflexible and expensive. CloudCities is the perfect solution. Cities, developers, utility providers and stakeholders can collaborate in a beautiful and productive Smart 3D City service. “CloudCities is a YouTube-style smart 3D city service.” said Antje Kunze, CEO and co-founder of SmarterBetterCities. “Custom 3D maps can be created and urban flows, such as energy and financial aspects can be easily shared, reviewed and modified. Unlike its competitors CloudCities gives full data control to its users. CloudCities is web browser based and is compatible with mobile devices, including the latest iOS and Android tablets and phones.”

SmarterBetterCities is a fast growing 3D web startup with seven full time positions based in Zurich, Switzerland and Redlands, California where it is next to the Esri headquarters, the leading provider of GIS software in the world. SmarterBetterCities participates in the Esri Startup Program and develops its products on Esri’s ArcGIS technology.

The company is a success story of the European Climate-KIC Accelerator and the ETH Zurich Spin-off programme. Over the last two-and-a-half years, SmarterBetterCities received more than $1.25 million in earlier seed funding from research projects and commercial activities for its development of CloudCities. CloudCities has been available as a beta product since December 2014 and its official release will be in July 2015. So far it has generated 8500 views on its contents and attracted more than 170 publishers that create and manage 3D cities on a daily basis.

ZKB Start-up Finance: Zürcher Kantonalbank (ZKB) – as an independent, incorporated public-law institution – is wholly owned by the canton of Zurich. ZKB invests through its bank-owned Venture-Fund PIONIER every year risk capital in about 20 start-up companies in the Zurich economic area. By doing so ZKB assists the transfer of ideas into economy. https://www.zkb.ch

Climate-KIC Acceleration Programme: Climate-KIC is the EU’s main climate innovation initiative. With its headquarters in London, UK, it leverages its centres across Europe to support start-up companies, to bring together partners on innovation projects and to educate students to bring about a connected, creative transformation of knowledge and ideas into products and services that help mitigate and adapt to climate change. http://www.climate-kic.org/for-entrepreneurs/accelerator/

ETH Zurich Spin-off: Since the 1990s, ETH Zurich (one of the world’s leading universities for technology and the natural sciences) has been supporting the foundation of companies based on its research achievements. The objective is to turn such research results into marketable products and to create qualified jobs. https://www.ethz.ch/en/industry-and-society/innovation-and-setting-up-companies/spin-offs.html