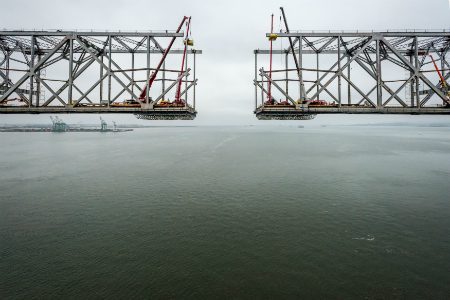 OAKLAND – Caltrans on Thursday completed the demolition of the monumental 80-year-old Cantilever section of the East Span of the San Francisco-Oakland Bay Bridge.

Contractors dismantled the 1936 Cantilever East Span piece-by-piece, working in near reverse order of the way it was erected some 80 years ago. Early in the process, two sections of the main span cantilevered outward 700 feet from their support piers and hundreds of feet above the bay.

“This careful balancing act was performed hundreds of feet above the Bay and had to deal with the elements and heavy lifts of lead-painted steel, all while adhering to strict environmental safeguards,” said Chief Bridge Engineer for the project, Dr. Brian Maroney.

“California Engineering Contractors Inc./Silverado Contractors, Inc., and the engineers truly deserve credit for a great job,” Maroney said. “This steel was new 80 years ago and technology was basically paper, pencils slide rules and calculations. The steel is now tired fatigued, cracked and rusted. This incredibly challenging work was completed on time, under budget and without loss of life, and that demands our respect.”

The original East Span cantilever truss was a half mile span made up of steel elements pieced together in a structural system called trusses servicing the Bay area for eight remarkable decades. Crews cut the cantilever at its center and dismantled both sides. The 576-foot long suspended span of the cantilever was then removed. Prior to cutting through the cantilever and separating its two halves, preparations were made to reduce structural tension and pull the suspended span on each end toward the rest of the Bridge.

This completes the first phase of the demolition process. Now crews will proceed to Phase Two of the demolition; dismantling the truss spans that stretch east of the cantilever to the Oakland shore.