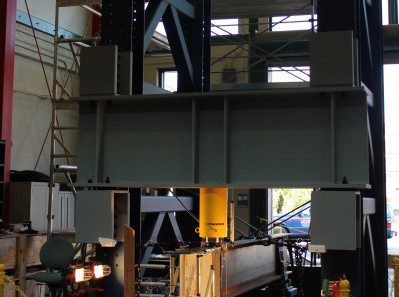 June 18, 2015—According to the Federal Highway Administration (FHWA), more than 30 percent of the 600,000 bridges in the United States have exceeded their 50-year life span. To keep them functional, it costs approximately $20.5 billion annually.

It’s a significant national concern. But Kevin Zmetra, a recipient of a Department of Homeland Security Science and Technology Directorate (S&T) , is looking for a better way. Zmetra, a doctoral candidate at the University of Connecticut, along with leading researchers, has tested the use of Ultra-High Strength Concrete (UHSC) – a strong material used to repair bridges much more quickly at a much lower cost.

“I became involved in the bridge project a few months after beginning the fellowship [because] I thought the project had great potential to solve a critical issue facing our nation’s infrastructure,” said Zmetra.

“This repair technique has the potential to address the critical problem of corrosion- damaged steel bridges around the nation in a creative way,” said Dr. Arash Zaghi, assistant professor of civil and environmental engineering and the principal investigator of the research project. “Once this method is established, state and federal agencies could restore many bridges at a fraction of the cost and time, and increase the safety of our transportation infrastructure.”

The method uses UHSC to repair corroded steel girders, which are the beams that support the bridge. The damage is caused by years of exposure to water and de-icing road salt commonly used during winter. Thus far, test results show this novel repair method has some real advantages:

“In the last year, the use and implementation of UHSC in the construction industry has significantly increased and is gaining momentum,” said Dr. Kay Wille, co-principal investigator.

Zaghi and Wille will further pursue their discoveries in the second phase of their research. This includes a more extensive look at plate-girder beams and the potential to completely eliminate the need to jack the bridge as well as to reduce lane closures. They will also use salt-fog testing to investigate the long-term durability of these repairs.

Zmetra has moved on to a consulting position in the transportation sector. The S&T Career Development Program that he participated in is designed to provide undergraduate and graduate students with career-building research experiences. As part of the program, students receive tuition assistance, an internship, and mentoring. Upon completion, they are required to work for one year in a homeland security position, and most continue their employment in the homeland security career field event after the first year of service.

Over the life of this project, funding has been provided by the Connecticut Department of Transportation, DHS, and industry collaborators Lafarge and Infra-Metals.

For more information on the career development program, contact a Center of Excellence oruniversityprograms@hq.dhs.gov.