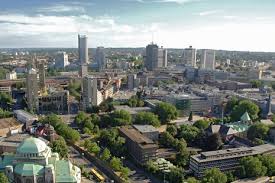 The German city of Essen has won the European Green Capital Award for 2017. The award was presented by Karmenu Vella, EU Commissioner for Environment, Maritime Affairs and Fisheries, at a ceremony this afternoon in Bristol, UK, which currently holds the title. Essen was singled out for its exemplary practices in protecting and enhancing nature and biodiversity and efforts to reduce water consumption. Essen participates in a variety of networks and initiatives to reduce greenhouse gas emissions and to improve the city’s resilience in the face of climate change.

Commissioner Vella said: “It gives me great pleasure to present Essen with the European Green Capital Award for 2017. Essen has used the lessons from its industrial past to build an environmentally sound future. They have applied the principle of working with nature and reaped spectacular results. We have a great deal to learn from Essen’s green infrastructure and indeed from its ambitious plans for the future. I look forward to the events that will mark its year as the 2017 European Green Capital.”

Essen, together with all the previous European Green Capital winners, will act as a role model for other cities aspiring to improve their environmental performance, encouraging them to develop and apply innovative solutions as they progress towards sustainability targets.

Areas that particularly caught the attention of the jury included Essen’s impressive water management system, based on a sound knowledge of water-related problems and an open-minded approach to innovative solutions. Among these were multifunctional green areas which are used for rainwater management, flood prevention and groundwater recharge. Its plans for the future are ambitious, reflecting the most advanced approaches. Essen’s objective to prevent rainwater entering the combined sewer network in at least 15% of the area served by those sewers especially impressed the jury.

The European Commission also announced the winners of the inaugural European Green Leaf 2015 competition. Mollet del Vallès and Torres Vedras became the first cities to receive the accolade in recognition of their commitment to better environmental practices and green growth. The European Green Leaf (EGL) 2015 targets cities with a population between 50 000 and 100 000 inhabitants.

The European Green Capital Award is ultimately about making cities more pleasant and healthy places to live, work and play. The award is given to a European city with a record of achieving high environmental standards, which is committed to ambitious environmental goals and further progress towards sustainable development and can act as a role model to inspire other cities.

The European Green Capital Award aims to spur cities to commit to further action, and to showcase and encourage the exchange of best practice among European cities. Between 2010 and 2017, eight cities – Stockholm, Hamburg, Vitoria-Gasteiz, Nantes, Copenhagen, Bristol, Ljubljana and now Essen – have won the award.