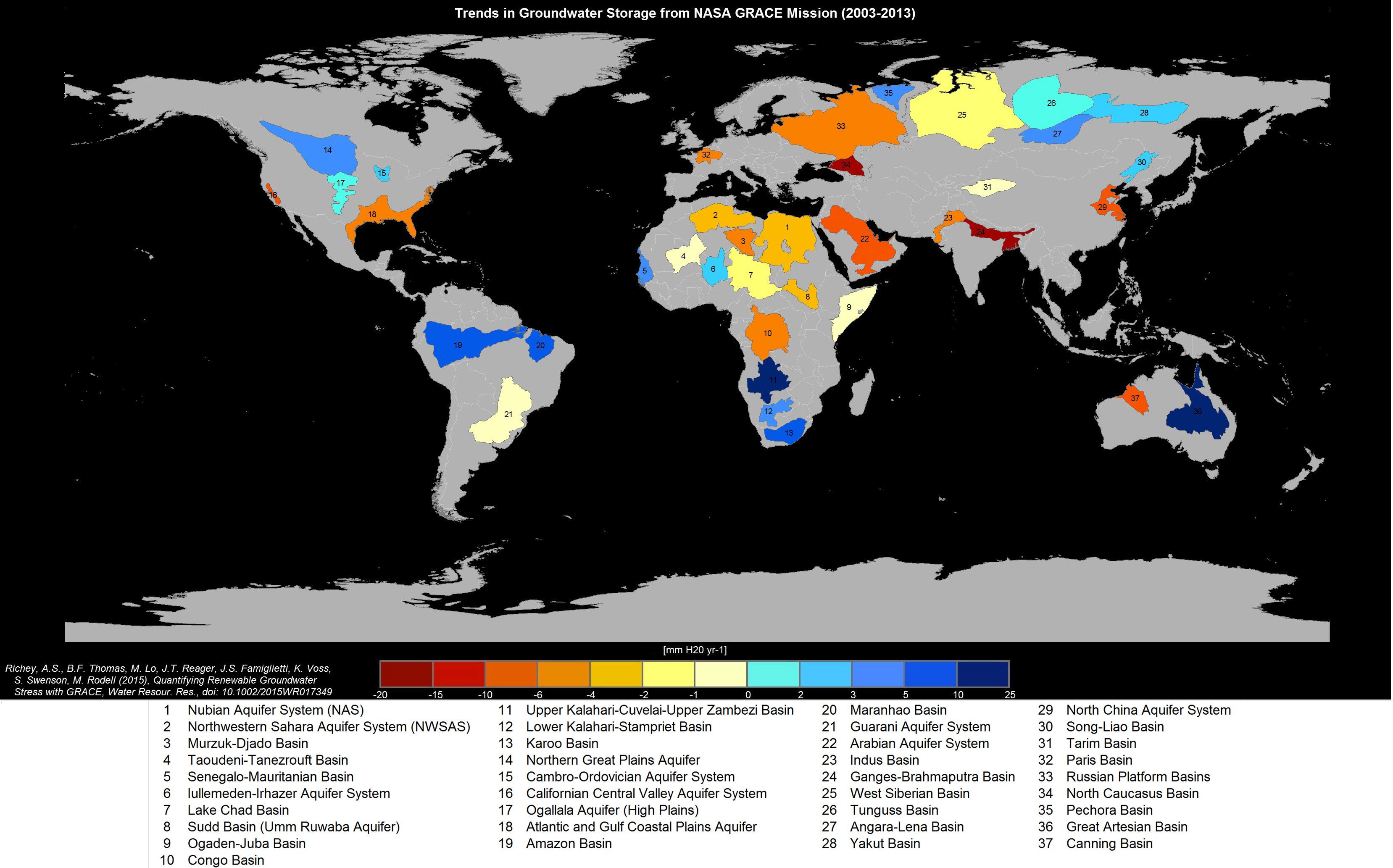 Irvine, Calif., June 16, 2015—Two new studies led by UC Irvine using data from NASA Gravity Recovery and Climate Experiment satellites show that human consumption is rapidly draining some of its largest groundwater basins, yet there is little to no accurate data about how much water remains in them.

The result is that significant segments of Earth’s population are consuming groundwater quickly without knowing when it might run out, the researchers conclude. The findings appear today in Water Resources Research.

“Available physical and chemical measurements are simply insufficient,” said UCI professor and principal investigator Jay Famiglietti, who is also the senior water scientist at NASA’s Jet Propulsion Laboratory. “Given how quickly we are consuming the world’s groundwater reserves, we need a coordinated global effort to determine how much is left.”

The studies are the first to characterize groundwater losses via data from space, using readings generated by NASA’s twin GRACE satellites that measure dips and bumps in Earth’s gravity, which is affected by the weight of water.

For the first paper, researchers examined the planet’s 37 largest aquifers between 2003 and 2013. The eight worst off were classified as overstressed, with nearly no natural replenishment to offset usage. Another five aquifers were found, in descending order, to be extremely or highly stressed, depending upon the level of replenishment in each – still in trouble but with some water flowing back into them.

The most overburdened are in the world’s driest areas, which draw heavily on underground water. Climate change and population growth are expected to intensify the problem.

“What happens when a highly stressed aquifer is located in a region with socioeconomic or political tensions that can’t supplement declining water supplies fast enough?” asked the lead author on both studies, Alexandra Richey, who conducted the research as a UCI doctoral student. “We’re trying to raise red flags now to pinpoint where active management today could protect future lives and livelihoods.”

The research team – which included co-authors from NASA, the National Center for Atmospheric Research, National Taiwan University and UC Santa Barbara – found that the Arabian Aquifer System, an important water source for more than 60 million people, is the most overstressed in the world.

The Indus Basin aquifer of northwestern India and Pakistan is the second-most overstressed, and the Murzuk-Djado Basin in northern Africa is third. California’s Central Valley, utilized heavily for agriculture and suffering rapid depletion, was slightly better off but still labeled highly stressed in the first study.

“As we’re seeing in California right now, we rely much more heavily on groundwater during drought,” Famiglietti said. “When examining the sustainability of a region’s water resources, we absolutely must account for that dependence.”

In a companion paper published today in the same journal, the scientists conclude that the total remaining volume of the world’s usable groundwater is poorly known, with often widely varying estimates, but is likely far less than rudimentary estimates made decades ago.

By comparing their satellite-derived groundwater loss rates to what little data exists on groundwater availability, they found major discrepancies in projected “time to depletion.” In the overstressed Northwest Sahara Aquifer System, for example, this fluctuated between 10 and 21,000 years.

“We don’t actually know how much is stored in each of these aquifers. Estimates of remaining storage might vary from decades to millennia,” Richey said. “In a water-scarce society, we can no longer tolerate this level of uncertainty, especially since groundwater is disappearing so rapidly.”

The study notes that the dearth of groundwater is already leading to significant ecological damage, including depleted rivers, declining water quality and subsiding land.

Groundwater aquifers are typically located in soil or deeper rock layers beneath Earth’s surface. The depth and thickness of many make it tough and costly to drill to or otherwise reach bedrock and learn where the moisture bottoms out. But it has to be done, according to the authors.

About the University of California, Irvine: Currently celebrating its 50th anniversary, UCI is the youngest member of the prestigious Association of American Universities. The campus has produced three Nobel laureates and is known for its academic achievement, premier research, innovation and anteater mascot. Led by Chancellor Howard Gillman, UCI has more than 30,000 students and offers 192 degree programs. It’s located in one of the world’s safest and most economically vibrant communities and is Orange County’s second-largest employer, contributing $4.8 billion annually to the local economy. For more on UCI, visit www.uci.edu.