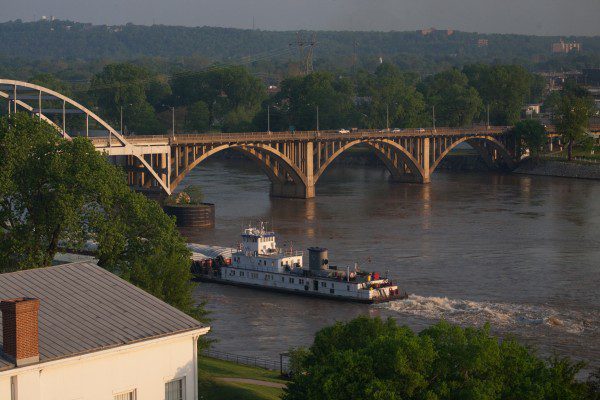 FAYETTEVILLE, Ark. – The Maritime Transportation Research and Education Center, known as MarTREC, a consortium of researchers focused on maritime and multimodal transportation research, has received $923,700 from the U.S. Department of Transportation. The funding is an additional grant – the center has received a total of $3,740,000 since 2013 – to support research and programs through September 2018.

“MarTREC researchers will continue to work on vital projects that will improve and sustain navigable waterways and help build the communities that serve and rely on these waterways,” said Heather Nachtmann, professor of industrial engineering and the center’s director. “We are grateful that the transportation department entrusts our researchers with the national, strategic goal of economic competitiveness through efficient, resilient and sustainable transportation systems on U.S. navigable waterways.”

The consortium’s researchers are nationally recognized experts in maritime and multimodal logistics, which integrates trucking, rail and barge carriers. They focus on the development of resilient and sustainable infrastructure and effective emergency management systems for coastal and river valley communities.

As part of the center’s efforts, U of A researchers are developing a rapid and non-destructive method to assess the condition of levees and their resistance to liquefaction, the breakdown of soil caused by earthquakes or other geologic stresses. This team coordinates with the U.S. Army Corps of Engineers to identify levees that are unacceptable or minimally acceptable based on current structural criteria.

Another U of A research team is working on a multimodal supply-chain system to support secure and resilient inland waterways. The objective of this project is to provide timely information on cargoes that should receive high priority rating for off-loading and alternative infrastructure if there is a disruption to normal waterway routes due to a natural disaster or an attack.

Nachtmann, who is also associate dean of research for the College of Engineering, is the principal investigator on the grant.