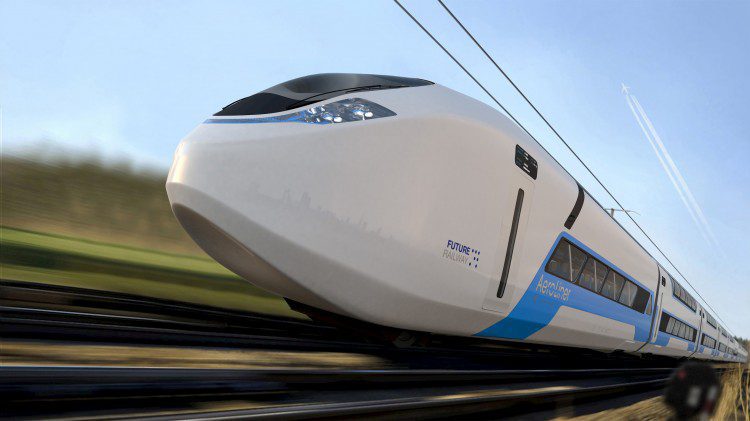 The Aeroliner3000 train concept, jointly developed by the German Aerospace Center (Deutsches Zentrum für Luft- und Raumfahrt; DLR) and the Andreas Vogler Studio (AV Studio) architectural practice, is one of the three finalists in the international ‘Tomorrow’s Train Design Today‘ competition. The partners, DLR and AV Studio, are receiving sponsorship of 750,000 British pounds (around 1,032,000 Euro) to continue developing their concept. In the course of the competition, engineers, designers and architects were called on to develop innovative solutions to prepare rail transport in Great Britain for the future. The focus was on high-speed transport and a time horizon of 30 years. A total of 48 submissions were received.

Ideas for a leap in innovation

“The rail system in Great Britain is facing a leap in innovation. In the coming decades, the number of new trains required will increase dramatically because old trains will need replacing and, at the same time, new high speed connections will be established,” says Joachim Winter from the DLR Institute of Vehicle Concepts in Stuttgart, summarising the initial situation. Currently, there is only one high-speed line in Great Britain, which connects London to the Eurotunnel under the English Channel. The targets of the competition are correspondingly challenging. The proposed solutions are supposed to significantly reduce costs, double passenger capacity, reduce carbon dioxide emissions and provide passengers with maximum comfort without having a negative impact on safety or operational reliability.

DLR ‘Next Generation Train’ project as a template

The technology of the Aeroliner3000 is largely based on DLR’s Next Generation Train (NGT) train concept. In this project, scientists from 11 DLR institutes are carrying out interdisciplinary work on central issues such as how the next generation of high-speed trains can be made even faster, safer, more comfortable and more environment-friendly. In doing so they are considering a wide range of aspects, from lightweight construction of the carriage bodies and chassis to aerodynamics, energy and passenger flows, as well as life cycle costs.

“To successfully participate in the competition, we needed to adapt the NGT concept to the British rail infrastructure in terms of design and interpretation,” explains Andreas Vogler, owner of the eponymous Munich-based architecture and design studio. A smaller clearance gauge is traditionally used on British railways and this does not currently permit double-decker railway carriages. The clearance gauge is a construction specification for the dimensions of a rail vehicle and defines the prescribed clearance or free space that there must be between the train and tunnel walls or signals, for example. “Like the NGT, the Aeroliner3000 is an entirely new conceptual train. Using innovative technologies and a clever design, we were able to demonstrate with the Aeroliner3000 that a highly comfortable double-decker high-speed train is also a promising solution for the British rail network,” say Vogler and Winter in summary.

The Aeroliner3000’s double-decker carriages provide 20 percent more seats than the reference train used in the competition. With better baggage handling and optimised control of the passenger flow when boarding and alighting, the concept also enables the stopping times of the train in stations to be significantly reduced.

Consistent use of lightweight construction techniques that reduce the weight of the carriage body by 25 percent and aerodynamic optimisation of the entire train reduce operating and maintenance costs and limit carbon dioxide and noise emissions. At the same time, the Aeroliner3000’s lightweight construction principle will enable a double-decker carriage to be deployed for the first time. The load-bearing structure of the carriage body is perfectly adapted to the requirements and loads – in other words, the ‘skeleton’ of the carriage body has the structural characteristics that are needed to ensure stability. This means that the interior of the carriage can be designed flexibly, for example with regard to the design and shape of the intermediate floor, making a double-decker concept possible.

The partners want to use the prize money to, among other things, construct a demonstration model of a centre coach for the Aeroliner3000 by the end of the competition in 2016. This would then be used principally to conduct further research into passenger comfort. “Our plan is to present the model at the InnoTrans 2016 international rail transport show in Berlin and inspire manufacturers with the concept,” says Joachim Winter, explaining the way forward. “DLR’s aim is to turn ideas into innovations and, once the technologies we have developed have reached a certain level of maturity, transfer them to industry.”

The ‘Tomorrow’s Train Design Today‘ competition was created and sponsored as part of the Future Railway Programme in collaboration with the Royal Institute of British Architects (RIBA) and the British Department for Transport, DfT. The Future Railway Programme is a joint initiative by British rail operator Network Rail and the British Rail Safety and Standards Boards (RSSB).