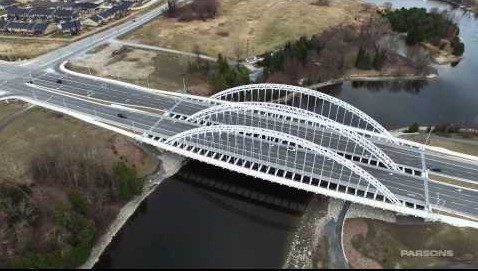 PITTSBURGH, June 10, 2015—A unique symbol of both cultural and environmental integrity, the Vimy Memorial Bridge represents a remarkable fusion of new structural innovations in a traditional heritage location. The bridge, spanning the Rideau Canal in Ottawa, Ontario, received the Gustav Lindenthal Medal at this year’s International Bridge Conference® (IBC).

The Gustav Lindenthal Medal, sponsored by Bayer MaterialScience LLC, is awarded annually to recognize a recent outstanding achievement in bridge engineering. To receive this honor, the bridge’s engineering effort must demonstrate not only technical and material innovation and success, but also positive community participation, aesthetic merit and harmony with the environment.

The open-air structure provides a more transparent, airy, and uninhibited atmosphere. This was important for creating a superstructure type that would not interfere with the natural elements around the river. Designers and engineers utilized an innovative, triple tubular arch configuration – believed to be the first of its kind in North America – that allows light to penetrate the massive deck to enhance and complement the natural, picturesque setting of the Rideau Canal. Inclined hangers significantly contribute to the transverse stability of the tri-chord arches by engaging the weight of the suspended deck. The team minimized the thickness of the concrete deck and employed LED light fixtures to significantly reduce energy consumption.

The bridge’s name commemorates the battle of Vimy Ridge, one of Canada’s most significant military achievements. The Rideau River at the bridge location is part of the Rideau Canal System, a Natural Historic Site in Canada and UNESCO World Heritage Site. As such, the bridge had to meet stringent design guidelines. These were addressed through several clever innovations, including a design that does not interfere with the waterway and other environmental features of the river, including fish.

The bridge also makes significant contributions to the economic, social, and environmental quality of life by significantly reducing the commute distance and time between the communities of Riverside South and Barrhaven.

Created in 1999, the Gustav Lindenthal Medal is named for one of America’s most celebrated bridge engineers. Lindenthal is widely admired for his innovative ideas, vision and foresight during the technology boom of the late 19th and early 20th centuries. It’s fitting that the IBC is held in Pittsburgh, where Lindenthal established an engineering practice. He went on to design the city’s Smithfield Street Bridge. This bridge is designated as both a National Historic Civil Engineering Landmark and a National Historic Landmark. Completed in 1883 as Pittsburgh’s first river bridge, the Smithfield Street Bridge is a double lenticular truss spanning the Monongahela River. It remains a popular passage today, serving more than 18,000 commuters and is the most heavily walked pedestrian bridge in the city.

With 2014 sales of EUR 11.7 billion, Bayer MaterialScience is among the world’s largest polymer companies. Business activities are focused on the manufacture of high-tech polymer materials and the development of innovative solutions for products used in many areas of daily life. The main segments served are the automotive, electrical and electronics, construction and sports and leisure industries. Bayer MaterialScience has 30 production sites around the globe and employed approximately 14,200 people at the end of 2014. Bayer MaterialScience is a Bayer Group company. Sustainability is central to the company’s business and is based around the key areas of innovation, product stewardship, social responsibility and respect for the environment.