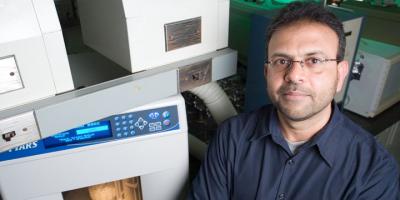 NEWARK, June 8, 2015—Somenath Mitra, distinguished professor of chemistry and environmental science, was awarded a patent last month for a next-generation water desalination and purification technology that uses uniquely absorbent carbon nanotubes to remove salt and pollutants from brackish water and industrial effluent for reuse by businesses and households.

Mitra’s new carbon nanotube immobilized membrane (CNIM) is an energy-efficient device designed to filter higher concentrations of salt than is currently feasible through reverse osmosis, one of the standard industry processes. It is also used to remove pollutants such as volatile organic compounds (VOCs) – chemicals routinely used in solvents – from water.

“There is a huge and growing demand for potable water coming from developing nations that are modernizing their infrastructure to improve living conditions. At the same time, droughts caused by climate change are reducing supply in many regions of the world, including parts of the U.S.,” Mitra said. “Our hope is to expand the supply of water in places that really need it, while also reducing costs for industry.”

Membrane distillation is a water desalination process in which heated salt water passes through a tube-like membrane, called a hollow fiber, which allows only pure water vapor to permeate its walls.  Potable water emerges from the net flux of water vapor which moves from the warm to the cool side of the membrane where it condenses. Certain industries such as semiconductor manufacturing and pharmaceutical processing also require ultra-pure water for their operations.

Mitra, who has conducted research on carbon nanotubes for the past 15 years, created a novel architecture for the membrane distillation process by immobilizing carbon nanotubes, which are an atom thick and about 10,000 times smaller than a human hair in diameter, in the membrane pores. Ken Gethard, a former doctoral student who helped him develop it, is the co-inventor on the patent.

“One of the key characteristics of carbon nanotubes is their capacity to both rapidly absorb water vapor  as well as industrial contaminants, including volatile organic compounds (VOCs), and then easily release them,” he notes.

In the case of fracking, the fresh water and chemicals that are pumped into the ground to release natural gas trapped beneath rocks absorb high concentrations of salt from the soil they pass through before returning as polluted water in need of treatment. Reverse osmosis, which relies on power-driven pump pressure to force water through a membrane, is not commonly used to treat this so-called produced water because it typically contains very high concentrations of salt, requiring extremely high pressure.

The electric power industry, which uses a vast amount of water to cool its generators, is also eager to come up with more efficient processes to treat its wastewater, including the incorporation of waste heat.

“Our hope is to dramatically improve overall water and energy utilization,” Mitra said.